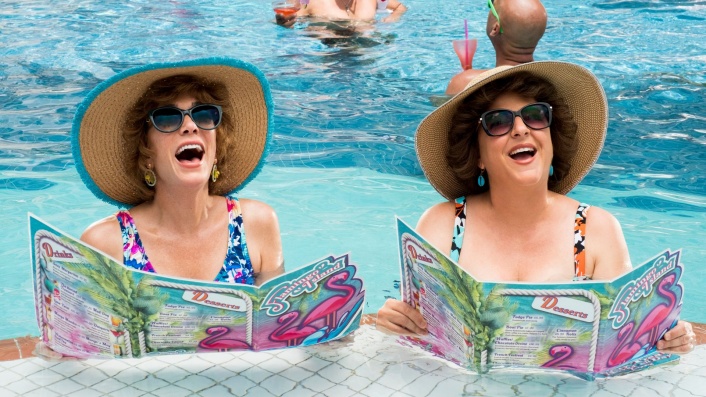 Remember that opening of Napoleon Dynamite, where Napoleon was tossing a green plastic Army man on a string out of the school bus window? If you didn’t think that was funny, it was an early sign you were gonna have a bad time.

Barb and Star Go to Vista Del Mar opens with its own litmus test, as a kid on a bicycle is delivering papers while singing “Guilty” along with the Streisand and Gibb in his headphones.

If that makes you laugh, stick around, you’ll laugh more.

Things have been better for the always perky, cullotte-loving Barb and Star (co-writers Annie Mumolo and Kristen Wiig). They’ve lost their husbands, their spot in weekly “talking club,” and their jobs at the hottest furniture store in Soft Rock, Nebraska (not a real place, but it should be).

With mid-lifers in tube tops, a 24 hour CVS and a parade of guys in Tommy Bahama, Vista Del Mar, Florida promises a vacation paradise perfect for “finding their shimmer.” Plus, it’s the home of the annual Seafood Jam (“where the crowd’s on the older side!”).

After a Disney-on-Viagra greeting at the hotel, it isn’t long before the BFFs’ rock solid bond is threatened by the handsome Edgar (Jamie Dornan) and the chance to rent a banana boat.

Will the girls’ friendship survive all the fibs and sneaking around? And how long can Edgar hide his part in the nefarious plan by an evil genius (also Kristen Wiig) to kill everyone on the island with poisonous mosquitoes?

I’m sorry, what was that second thing?

Just know director Josh Greenbaum keeps a loose grip on a film that’s ridiculous at every turn but still full of good-natured, garish fun and about as many laugh out loud moments as dry patches. Even though Barb and Star are new to us, they feel like characters the two stars have been privately honing for years, and it’s the chemistry of Mumolo and Wiig (who also co-wrote Bridesmaids) that allows a bit about the name “Trish” to continue beyond all limits of good sense until you give in to the hilarity.

You’ll also recognize plenty of faces in the supporting cast, highlighted by Mark Jonathan Davis doing his Richard Cheese lounge singer persona and Damon Wayans, Jr. as a spy with a bad habit of spilling his personal info (“dammit!”).

Expect some goofy outtakes over the credits, and waves of silliness that just won’t rest until your frown is turned upside down! It may not be dynamite, but Barb and Star brings enough laughs to make spending time with them a pleasure.