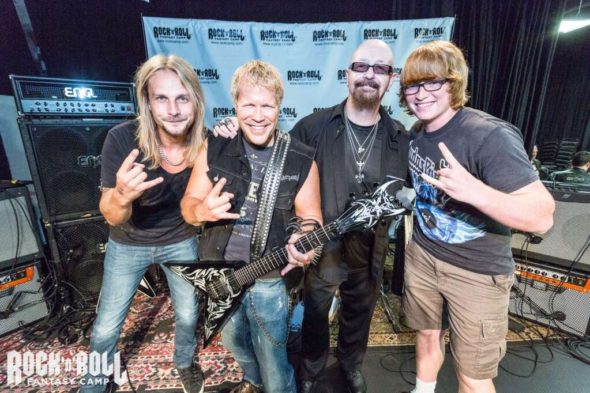 “Thanks for coming out tonight, we’re Motley Jüe..oy!”

Yes, Motley Jüe was a real band, at least for a few days. Picking the perfect band name is just a small part of the fun for the wannabe rockers at Rock and Roll Fantasy Camp. Rock Camp: The Movie takes us inside the experience that bridges the gap between stage and the Gold Circle section.

Because, let’s face it, those in the cheap seats can’t afford this, either. But for the fans that can swing it, RCTM shows us an indulgence that’s a lot less worthy of the kinds of jokes it inspired in year one.

Promoter David Fishof launched the first camp in 1997, to minimal interest. He got the idea from a practical joke played on him backstage by members of Ringo’s All-Starr Band (that home video footage is priceless), though low attendance the first year seemed to signal failure.

But after the camp was featured in various TV and commercial segments, it gained a foothold in popular culture. That brought some big rock stars into the fold, and Fishof (an interesting guy who could merit a documentary himself) suddenly had a hit.

The film is the debut feature for co-writers/directors Renee Barron and Douglas Blush, which often shows. Their focus can wander, and much of the production isn’t far removed from a marketing video. Plus, there’s no escaping that fact that much of the footage – judging by the look of some very famous faces – is clearly less than recent. The overall context of regular folk taking a chance to follow their passion, though, does help these rough edges seem appropriate.

Profiles of fewer campers might have allowed time to foster a more intimate feel, but the dreamers Barron and Blush introduce are worth knowing. We see lives uplifted, families strengthened, and true talent given the chance to grow.

Perhaps most surprisingly, we see rich and incredibly successful musicians truly moved by their students, and reconnecting with the simple joy of music that set them on their path. And some of them – Roger Daltrey, Paul Stanley and Sammy Hagar especially – seem like really nice people.

Yeah, Gene Simmons is still obnoxious. Even fantasies have their limits.

← Diamond Life
Tale from the Hood →
Scroll Up