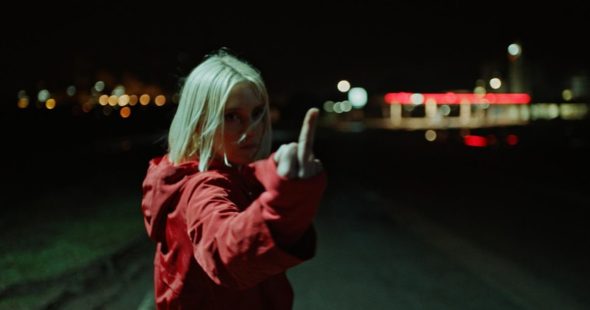 It’s hard to tell a new story. People have been telling stories since the beginning of people, and eventually – probably millennia ago – we realized we were just recycling the same dozen or so tales.

This week’s Shudder premiere, director Vincent Paronnaud’s Hunted, feels especially familiar. He knows that, presumably, or the woman being chased through a massive forest wouldn’t be wearing a red hooded coat.

It’s clear in every aspect of the telling of this story that the filmmaker (and a team of writers including Paronnaud, Lea Pernollet and David H. Pickering) want you to understand how familiar this is.

Indeed, Paronnaud’s tale of a man chasing a woman is so ordinary that no matter how outlandish the circumstances, onlookers barely register it as more than a moment’s blip in their day.

Hunted opens with a fairy tale, spun by fireside in a deep, dark woods, of a group of men who turn on a woman. In this ancient lore, things don’t turn out so well for the men, not because a savior steps in but because of something more primal.

And so, eons later, the aptly named Eve (Lucie Debay) is dealing with a boss who underestimates her and a husband who can’t stop calling. She goes out for a drink. That might have been the last we ever heard from Eve.

Instead, after a series of events that escalate beyond the point of realism to something bordering on the absurd, the whole damn forest hears her.

Debay’s transformation is also marked very obviously and very visually, underscoring the cartoonish nature of this particular enactment. She does a wonderful job of evolving from something in Act 1 that feels garden variety for horror into something surprising and fierce.

Arieh Worthalter equals her as the psychopath, often lensed to give him the look of an animated wolf charming villagers.

Paronnaud’s background is in animation—he co-directed Marjane Satrapi’s sublime black and white wonder Persepolis. His move to horror benefits from his visual flair. While the red coat stands out as an obvious nod (not to mention terrible camouflage), a later splash of blue feels simultaneously insane and warrior-like.

Or a fresh coat of paint.

← School of Hard Rocks
The Room Where It Happened →
Scroll Up