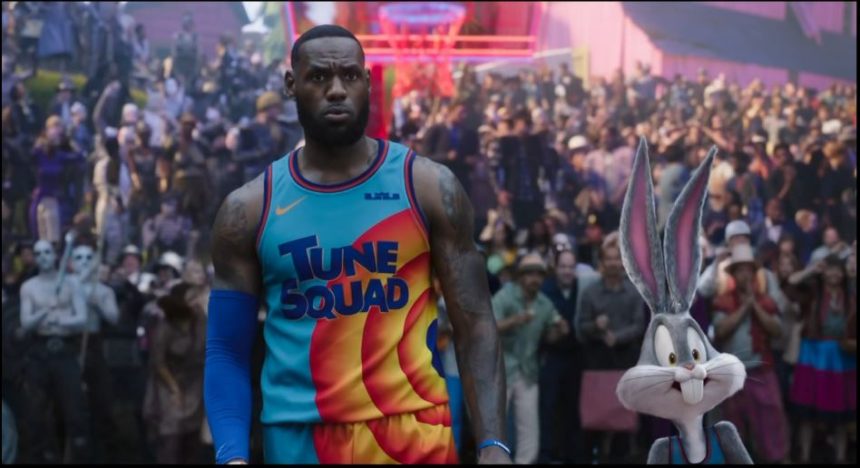 You think the GOAT debate about hoop gets heated? Just wait ’til your twitter thread blows up with hot takes on the thespian greatness of Jordan vs. LeBron!

Yeah, that’s not likely to happen.

I can tell you Don Cheadle is a great actor, and he’s clearly having a ball as the high-tech heavy in Space Jam: A New Legacy.

Cheadle is Al G. Rhythm, a (what else?) algorithm inside the Warner 3000 computer system that has designed a can’t miss WB idea for LeBron James. But LeBron is not impressed, so Al decides to get even by pitting LBJ against his own 12 year-old son, Dom (Cedric Joe).

Dom is actually more interested in video game design than basketball, but feels pressured by his superstar Dad to follow in the family business. Al seizes on this rift, pulling father and son into the virtual world, stealing Dom’s design for a basketball video game, and offering a deal.

You guessed it: classic Tunes (featuring Zendaya voicing Lola Bunny) vs. some brand new Goons (basketball superstars including Anthony Davis, Damian Lillard and Diana Turasi). A win for the Tune Squad puts the James family back to normal, but a loss means they’ll stay in the “server-verse” forever.

Adding WNBA stars and a new look for Lola are just two of the ways director Malcolm D. Lee (Girls Trip, The Best Man franchise) and the writing team succeed with an updated premise required for new sensibilities. Sure, the resolution of the father-son tension is predictable, but it manages a schmaltzy level of resonance amid the cartoon nuttiness that we’re really here for.

The antics of your favorite Looney Tunes characters (aside from an ill-advised, rapping Porky Pig) are classically looney, but the script also scores with some topical, self-aware humor aimed at the digital age, a classic Dave Chappelle bit, and LeBron himself (Dom: “Did my Dad leave?” Al: “That’s what he does, isn’t it?”)

And while the original ’96 Space Jam always smacked of product placement marketing, A New Legacy ups that ante, dropping LBJ and friends into any number of Warner properties, from Casablanca to Rick & Morty. Shameless, yes. Fun? Also yes.

As for King James, he follows that standout cameo in Trainwreck with a lead performance that alternates between awkward and decent. He does bring more natural onscreen charisma than Jordan (there’s a reason MJ barely speaks in his TV ads), but I’m guessing the task of acting opposite cartoons didn’t help with James finding a comfort zone in his first lead role.

But LeBron sure looks at home on the court, and once everybody joins him (and I mean everybody – have fun scanning the crowd), Lee rolls out some frantically fun game action with plenty of visual pop. This Space Jam may follow some of the original’s playbook, but there’s enough “new” here to justify the title, and by the time the buckets and anvils start dropping, A New Legacy finds its own fun and satisfying groove.