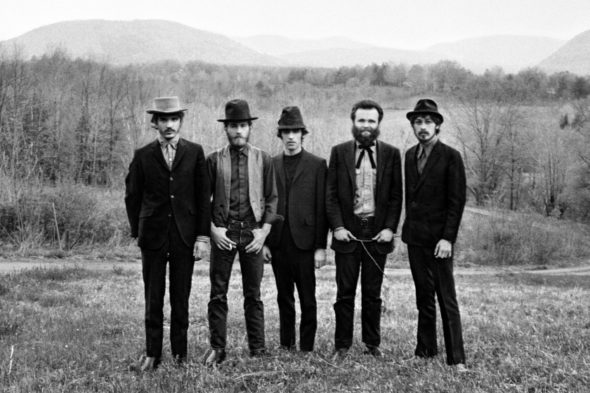 How big of a music geek are you if you can name all five members of The Band?

They were the rare musical breed whose biggest personality was not the lead singer. Still, even charismatic guitarist Robbie Robertson remained largely anonymous next to the very rock stars his work was influencing.

Writer/director Daniel Roher makes Robertson and his memoir the anchor of Once Were Brothers, and while that does limit the film’s scope, Robertson is such an enthusiastic and engaging storyteller – and his access is so valuable – you come to understand the choice pretty quickly.

Robertson met his future Band-mates while he was still a teenager, playing guitar and writing songs for Ronnie Hawkins and the Hawks. The Hawks’ talent soon outgrew Hawkins rockabilly style, as Robertson and the boys moved on to a legendary Hawks collaboration with Bob Dylan, before cementing their legacy as The Band.

Music docs are always going to be most interesting to the subject’s core following, but even casual Band fans will get bracing reminders of Robertson’s guitar virtuosity and drummer Levon Helm’s passionately soulful vocal power.

Plus, getting a peek at Dylan telling folk fans “Don’t boo me anymore!” and hearing Scorsese deconstruct his own filmmaking on the iconic concert film The Last Waltz fosters an engaging intimacy. At times, the reach extends beyond Robertson’s music history to touch on the creative process itself.

As a rock doc, Once Were Brothers blazes few trails, but the ones it travels are well worth revisiting. And though the lack of any counterpoint from surviving member Garth Hudson is noticeable, tour guide Robertson is the kind you’re ready to tip when the day is done.

Rick Danko, Richard Manuel, Hudson, Helm and Robertson, by the way, but you knew that.