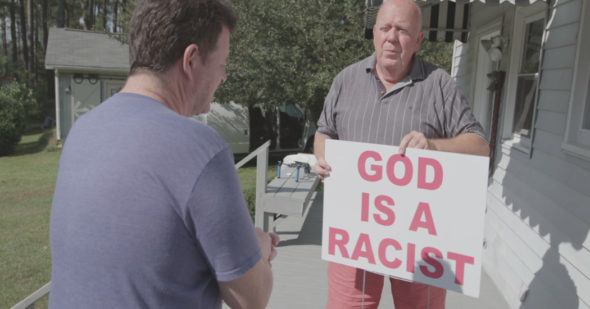 “Those who cannot remember the past are condemned to repeat it[1].”

In the documentary Viral, director Andrew Goldberg explores the recent rise of antisemitism in the United States and Europe. In a painterly black and white introductory sequence he gives the subject matter the feeling of a fairy tale. The film begins, “It started long ago with a lie about the Jew…”

If only the rest of the film was fiction.

Goldberg compares antisemitism to a virus (topical) which evolves and spreads, empowered by its ability to adapt to the people and circumstances in different locations. The virus began thousands of years ago. Now, one of the interview subjects suggests, we are nearing the “end of a Jewish golden age of feeling comfortable.” The virus is ending a period of dormancy and becoming active once again.

In this film, we are introduced to four “mutations” of the antisemitism virus: the Far Right, USA; Blaming the Jew, Hungary; The Far Left, The United Kingdom; and Islamic Radicalism, France.

Although tweaked in each mutation to suit the individual circumstances, the “virus” involves getting people to turn off their ability to think critically and giving them a embodied focus on which to place the blame for their fears or anxieties. (See Germany in the 1930s.)

In the US it’s the Jew as orchestrator of the Civil Rights movement and subsequent supposed lessening of accustomed white privileges. In Hungary it’s a campaign to brand George Soros as a puppet master apparently forcing Muslim refugees into the nation to destabilize national culture. In the United Kingdom it’s Jewish colonial capitalists evidently conspiring against the working class. In France, it’s Muslim former-colonial subjects violently murdering random French Jews because they ostensibly back the Palestinians against the Israelis.

Individual Jews are conflated with “the Jew,” which is associated with the threat, the change, the loss of power. Concepts that take years of study to unpack are simplified and reduced again and again until the result is a caricature of a hook-nosed grinning villain with a neon arrow pointing to it and letters spelling out, “B-A-D G-U-Y.”

The whole simplification process is only made more efficient by the availability of the Internet. Once the conspiracy theory is tailored for a local audience it can be repurposed by anyone with a cell phone and/or social media account and replicated over and over.

It’s a scary documentary Goldberg has put together. It’s scary because of the real-life examples of abuse, vandalism, and murder, and because the film itself can be a bit simplistic. This could easily be a miniseries or several individual films, rather than Viral‘s quick summaries of really complicated issues. (Just unpacking everything around the creation of the state of Israel could be its own series – or academic career.)

Still, it’s useful to be aware of when, how, and where a virus is surging. Those of us who are willing to think must keep an eye on the present so we are not doomed to repeat the past.

[1] A quote by George Santayana which is itself frequently misremembered.

← Feeling Seen
Put the Load Right On Me →
Scroll Up