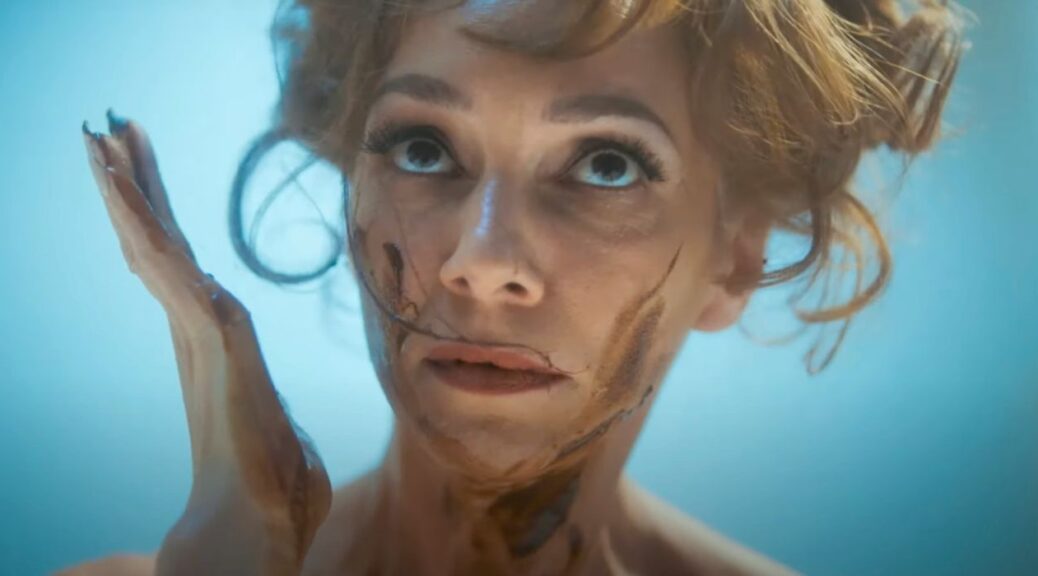 There is something so delightfully confounding about trying to review a Peter Strickland film. Even summarizing the plot is a walk into absurdity. For example, Strickland’s latest, Flux Gourmet, takes us inside a culinary collective institute. Here, sonic caterers and a man documenting them struggle with artistic authenticity.

What are sonic caterers, you ask? Maybe you didn’t, but I did. They are sort of performance artists whose medium is food.

Stones also narrates the film, and while his voiceover does help to articulate the plot of the film, his main focus is his own humiliating and painful flatulence problem.

The film often plays a bit like Strickland’s 2012 treasure Berberian Sound Studio, where an amiable outsider — a normal, nice guy — finds himself trapped with hedonistic, narcissistic artist types. Can he escape with his goodness intact?

Both films fixate on sound design, but Flux Gourmet settles into lighter, more clearly comic territory. And, at the risk of trying to read too much into Strickland’s absurdities, the film seems to say a lot about filmmaking as art versus commerce—the vulgar act of consuming and producing.

Which brings us back to poor Stones. Papadimitriou’s sympathetic performance delivers a nicely human counterpoint to the narcissistic, shallow characters that surround him. Christie, lavishly costumed and made up, is especially entertaining. Her patronizing sparks with Mohamed’s dictatorial Elle create absurd comic gold, only outdone by the self-impressed in-house medic, Dr. Glock (Richard Bremmer).

Strickland’s carved himself a recognizable niche in modern absurdist filmmaking with his precise, eclectic visual instincts. Funnier than Yorgos Lanthimos, more biting than Quentin Dupieux, more accessible than Leos Carax, Strickland wallows in his own very specific preoccupations. But he does so with such panache that it’s tough not to let him convert you.

This story feels somewhat slight compared to the complicated plotlines of Strickland’s earlier films, especially his 2018 horror treasure In Fabric. But Flux Gourmet is the filmmaker’s funniest feature.