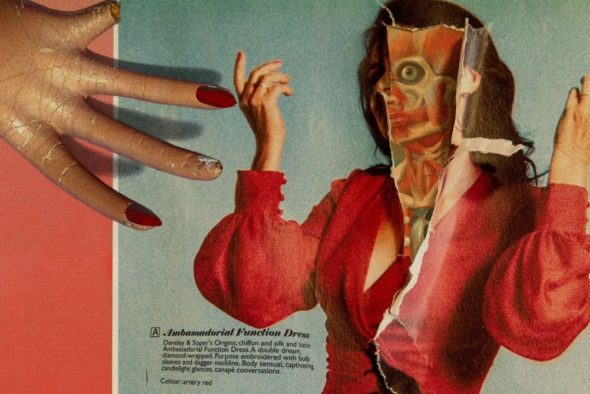 Weird in a good way.

His latest follows a red Ambassadorial Function Dress and the havoc it wreaks on its wearers.

This sounds like Yong-gyun Kim’s 2005 Japanese horror The Red Shoes, but Strickland has something far less sensible, less predictable, and more memorable in store for you.  (Quick PSA: If you can be less sensible than a Japanese ghost story horror and still make a watchable, even fascinating, film, you are at the top of your game.)

We meet Sheila (Marianne Jean-Baptiste), lonely fiftysomething bank teller just finding her way back into the dating pool and in need of a new dress. She heads, during sales season, to Dentley & Soper, where a coven of sales women led by Strickland favorite Fatma Mohamed (she owns this movie) will do what they can to usher clients toward a “transaction of ecstasy.”

This heightened perfume-ad speak also spills from the department store sales women—each a cross between a Victorian witch and a mannequin—hinting at the fetishistic nature of the entire film.

Sheila is a good egg waiting to crack played with working class grace by Jean-Baptiste (Secrets and Lies). In the tradition of the genre, we root that good egg Sheila will somehow outwit the killer dress her saleswitch conned her into purchasing.

Sheila’s story represents the first half of In Fabric, a peculiar but somewhat straightforward horror film. At the film’s halfway mark, Strickland makes a quick left turn into full blown absurdity, which awaits you in the second half.

Not a frame, not a glance, not a bizarre line of dialog is wasted or misplaced in a bold vision that’s stylized nearly to death. In a good way. Strickland’s audacious anti-consumerism fantasy must be seen to be believed.