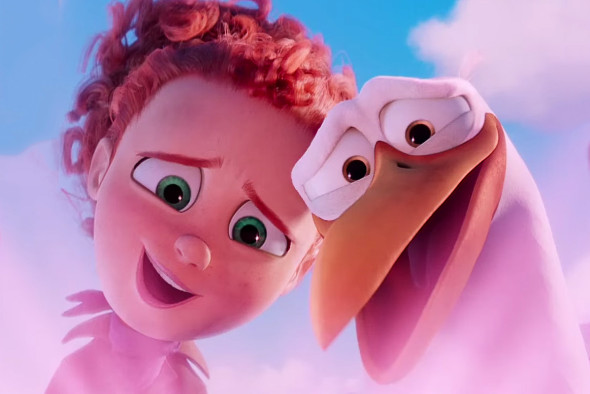 “Where do babies come from?” Multiple sources, apparently.

Storks have been out of the baby business for a few decades, and Junior is up for a big promotion at CornerStore.com. To prove he’s ready to be the head honcho, he simply has to fire Tulip the Orphan (and human). When Tulip accidentally makes a baby (at the baby factory, of course!) Junior suddenly finds a few more obstacles between himself and his promotion.

The plot becomes increasingly convoluted. The baby is destined for the Gardener family, comprised of two busy parents and one lonely child. There’s a bizarre pigeon character. The talents of Keegan-Michael Key (Alpha Wolf) and Jordan Peele (Beta Wolf) are utterly wasted in a wolf pack that has one joke and runs with it. And runs with it.

To be fair, this is a children’s movie. The children in the audience thought the wolves were hilarious.

Written by Nicholas Stoller and co-Directed with Doug Sweetland, Storks’ greatest strength is its self-referential humor. When Sarah Gardner (Jennifer Aniston) takes out a chimney with one swing of a hammer, she comments to the effect of “Wow. That is… that is not a well-made chimney. I mean, I’m a pretty small woman and that just came right down.”

It’s the talent of Andy Samberg (Junior) that elevates Storks from a middling animated film to something enjoyable. His impeccable comedic timing and improv skills shine through, making Junior complex and a little dark.

It’s hard to tell, with an animated feature, how much comedic timing is in the hands of the voice actors, and how much can be attributed to the animators and sound mixers. But, the general speed of dialogue overall is another defining quirk of Storks. Much of the repartee happens at breakneck speed, which gives the effect of wit, even if wit isn’t present.

Stoller and Sweetland take a stab at diversity that earns a light golf clap at best. In montage scenes babies appear in all colors, but also with an array of unrealistic hair colors (pink, blue, green). All the speaking characters (human), minor or major, are white.

If I had screened this film at home, I probably wouldn’t even raise the issue. Instead I sat in a theatre filled with families and their children infinitely more diverse than those on screen. A little black girl, no more than four, shuffled past me with her father to go to the bathroom, and I wondered “Does she see herself as a background character?”

You can point to Disney’s Home (2015) or The Princess and the Frog (2009) for black lead characters, but two versus a genre isn’t much. You can point to even less for Asian Americans, Indian, Native American etc. The white kids own the industry.

It’s not that an all-white cast is necessarily unrealistic; it’s unnecessary. Only a quarter of the children in the theater were truly represented on screen. In 2016, this makes me very tired.

Parents won’t find Storks hard to watch alongside their children. But, Storks lacks the mastery to rocket into the all-star league with contemporaries like Finding Nemo (2003), Zootopia (2016), or even the same studio’s Lego Movie (2014).