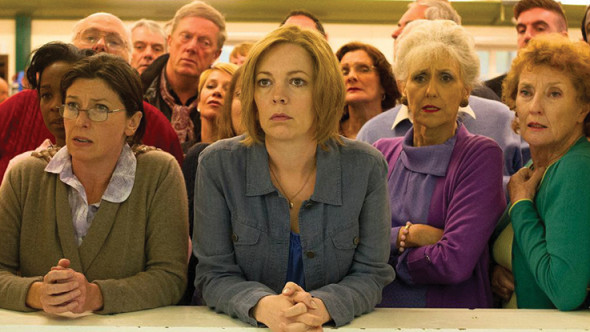 London Road takes us to the sleepy English town of Ipswitch back in 2006, when a string of murders had residents looking at each other with growing suspicion. The tale is told not only through music, but more importantly through the words of the residents themselves, exactly as they said them in interviews.

Sing: “Everyone is very, very nervous….”

It’s a fascinating clash of material, as enthralling onscreen as it apparently was as a highly successful stage show. Director Rufus Norris and writer Alecky Blythe craft a film so inviting and original, it becomes exponentially more enjoyable as it continues to exceed your expectations.

While not exactly profound, what London Road lacks in depth it makes up in sheer artistic expression. Lines are repeated and repeated again, layered over each other in rising choruses amid elaborate choreography.

That what-am-I-watching face on the person next to you? You’re probably wearing it, too.

The cast (including a Tom Hardy cameo) is uniformly perfect, led by the always-welcome Olivia Coleman as the plucky Julie. Seeking to help her neighborhood recover from the murders, Julie organizes a gardening contest, then floors you as she cheerily describes the reason she’s grateful to the “Suffolk Strangler.”

Like some bastard child of Sweeney Todd, London Road is a thoughtful, darkly funny and melodic peek into blinding self-interest, and unlike anything you’re likely to see this year.