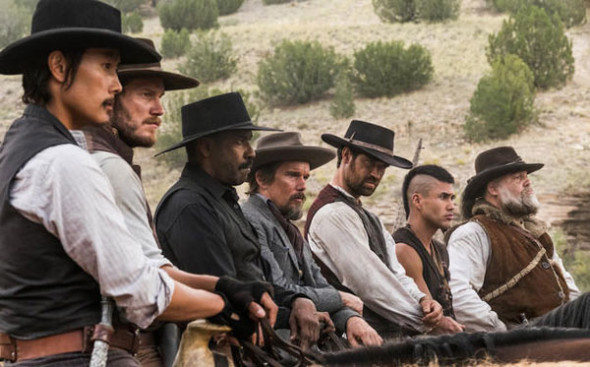 What if women, traumatized veterans, blacks, Asian Americans, American Indians, Mexican Americans and whatever white men we have left with a conscience exerted their inalienable right to govern a country that belongs as much to them as to anyone?

Or, what if Hollywood injected these themes into an old Western and hired fewer white guys playing Mexicans?

I give you, Antoine Fuqua’s The Magnificent Seven.

Denzel Washington anchors the septet as Sam Chisolm, bounty hunter. Newly widowed Emma Cullen (Haley Bennett) approaches him with a proposition: Rid Rose Creek of its evil despot (Peter Sarsgaard, wearily evil) in return for everything they have to give.

He’s been paid a lot before, but never everything.

So, Chisolm gathers a group of amiable rogues and heads to near-certain doom in the name of justice – like a Suicide Squad that doesn’t suck.

Based on John Sturges’s 1960 adaptation of Kurasawa’s 1954 classic Seven Samurai, Fuqua’s attempt is already three steps removed from originality. More than that, it’s tough to reignite the spark that made a 50+ year old story fun in the first place.

Not that Fuqua doesn’t take some liberties. Riding alongside Chisolm is as diverse an array of gunslingers as you’re likely to find.

The film’s multicultural, multi-gendered slant, while appealing, is also jarringly anachronistic. Aside from a handful of good-natured barbs from inside the posse and a bit of stink eye from some of the dodgier locals, there’s nary a racist whisper. In America, circa 1867.

Let’s not even talk about Bennett’s cleavage.

Obvious flaws aside, you can’t argue the cast. D’Onofrio’s a freak (I mean that in the best way), Lee is quietly fascinating, and Denzel has the inarguable gravitas and wicked charm to pull the plan together.

Seriously, though, Sturgis’s film is more charmingly nostalgic than it is classic – like a toothless Wild Bunch. Fuqua respects the film that inspired his, and works in affection for many of the Westerns that define the genre.

He proves again his capacity to stage action, and the film’s final hour is a mixture of genre odes and glorious choreography as explosions crash, bullets fly and projectiles project.

Which would be great – given the cast, it might even be enough – if Fuqua understood the element that separates Westerns from other genres. It’s not a gatling gun, a saloon or a lonesome street itching for a shoot-out. It’s the haunted heartbeat of the damaged gunslinger. The Magnificent Seven, though fun, is too slick and superficial to find that rhythm.