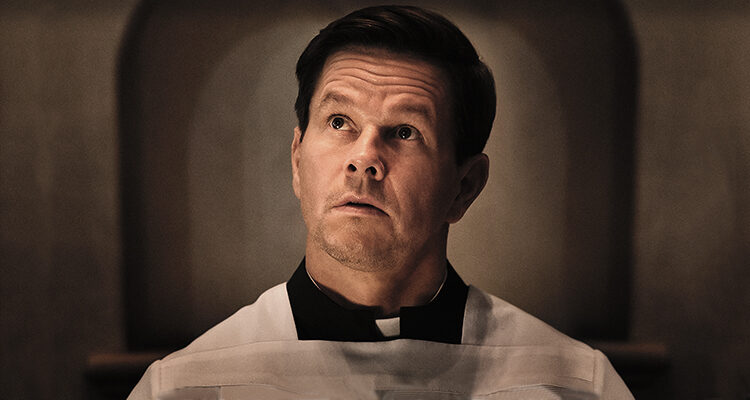 It shouldn’t be surprising to hear Mark Wahlberg was so committed to bringing the story of Father Stu to the screen that he funded much of it himself. Wahlberg’s own rough-and-tumble, sometimes unsavory past is hardly a secret. But now, as a devout Catholic, Wahlberg seems drawn to these stories of restless souls finding their way to the straight and narrow.

Stuart Long was a Montana native from a dysfunctional family who found some success as a Golden Gloves boxer in the mid 1980s before he decided California was the place he ought to be. Stu’s quest for movie stardom never got beyond a few commercials and bit parts, but his quest to win over a girlfriend (here named Carmen) got him a Catholic baptism and a surprising calling.

In her feature debut, writer/director Rosalind Ross frames Stu’s journey around the tenet that suffering brings one closer to God. Grief and disappointment have turned his father (Mel Gibson, effectively dialing down the SOB cartoonishness) into a bitter drunk and his mother (Jacki Weaver, always a pleasure) into a woman too afraid to be hopeful.

Wahlberg is natural and affecting as the Stu who responds to it all by forging ahead, always looking for the next angle to work or the next person to charm with an R-rated quip. As committed as he is though, Wahlberg has more trouble making Stu’s conversion feel like a true change of heart, instead of just his latest obsession.

Stu’s journey to the priesthood is interrupted by a tragic medical diagnosis, but the setback never lands as forcefully as it should. And while Ross rightly doesn’t shy away from Stu’s moral conflicts, his rivalry with a fellow seminarian (Cody Fern) often feels forced and manipulative.

Too profane to land in the “faith-based” stable, the film’s treatment of the sacred nonetheless manages moments that are nuanced and sincere. Ross juxtaposes Stu’s baptism with a wonderfully ironic soundtrack choice, while bringing a layered tenderness to the moments when Stu breaks the news to Carmen (Teresa Ruiz, terrific) that he will leave her behind for the priesthood.

The true story of Stuart Long is indeed a compelling one, and there are stretches of Father Stu that do him justice. But even with its embellished treatment, the film feels dramatically slight. It’s a sturdy and proficient testament to faith, but short of truly rousing.