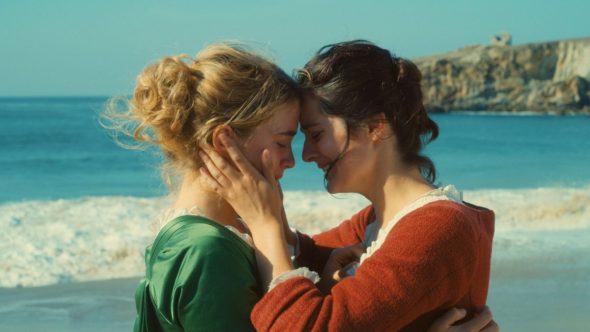 Portrait of a Lady on Fire

Celine Sciamma follows up the vitally of-the-moment indie Girlhood with this breathy, painterly period romance only to clarify that she is a filmmaker with no identifiable bounds. In the 1790s on a forbidding island in Brittany, Marianne (Noemie Merlant) arrives to paint the wedding portrait of Heloise (Adele Haenel), but since Heloise is not marrying voluntarily, she will not sit for a painter. So, a ruse is developed: Marianne pretends to be simply a companion as she steals glances then sketches from memory into the night.

What develops along with the startlingly beautiful intimacy between the women is a thoughtful rumination on memory and on art, on the melancholic but no less romantic notion that the memory, though lonesome, is permanent and perfect.

Portrait of a Lady on Fire is a tenderly romantic film of self-discovery that asks a lot of questions.

What would life be like with no men at all, the film seems to ask. Unseen, nameless men (because we see very few) may rule the world, and the existence of one casts a pall over the events of the film. But, at least until Mother (Valeria Golino) returns with news of the wedding, this is a community of women.

On the island, women gather at a bonfire, passing time, singing and seeking each other’s guidance. In the austere mansion, Heloise, Marianne and servant Sophie (Luana Bajrami) look after one another. In a more intimate chamber, two women become friends and then lovers and then, likely, the most important relationship the other will ever have.

Offering a master class in visual storytelling, Sciamma relies far less on words than images, ending conversations or omitting them entirely, able instead to deliver meaning with a glance, a gesture, a flame or an ocean wave.

And with art. What Sciamma is able to convey about love, struggle, empowerment and art by virtue of the changing canvas on which Marianna must commit Heloise’s portrait is truly extraordinary.

Sciamam’s film has a painterly quality, frame after frame worthy of museum wall space. And yet, Portrait lacks artifice. Thomas Grezaud’s set design, Dorothee Guiraud’s costumes and, in particular, Claire Mathon’s cinematography blend together to create a costume drama worthy of the historical and art period in question.

Portrait of a Lady on Fire is breathtakingly gorgeous. But, like Heloise’s portrait in the film, that’s not enough to make it a masterpiece. It’s the authenticity to the intimacy—perhaps partly born of the fact that Haenel and Sciamma are a real life couple—that’s inescapable, and it drives the piece.