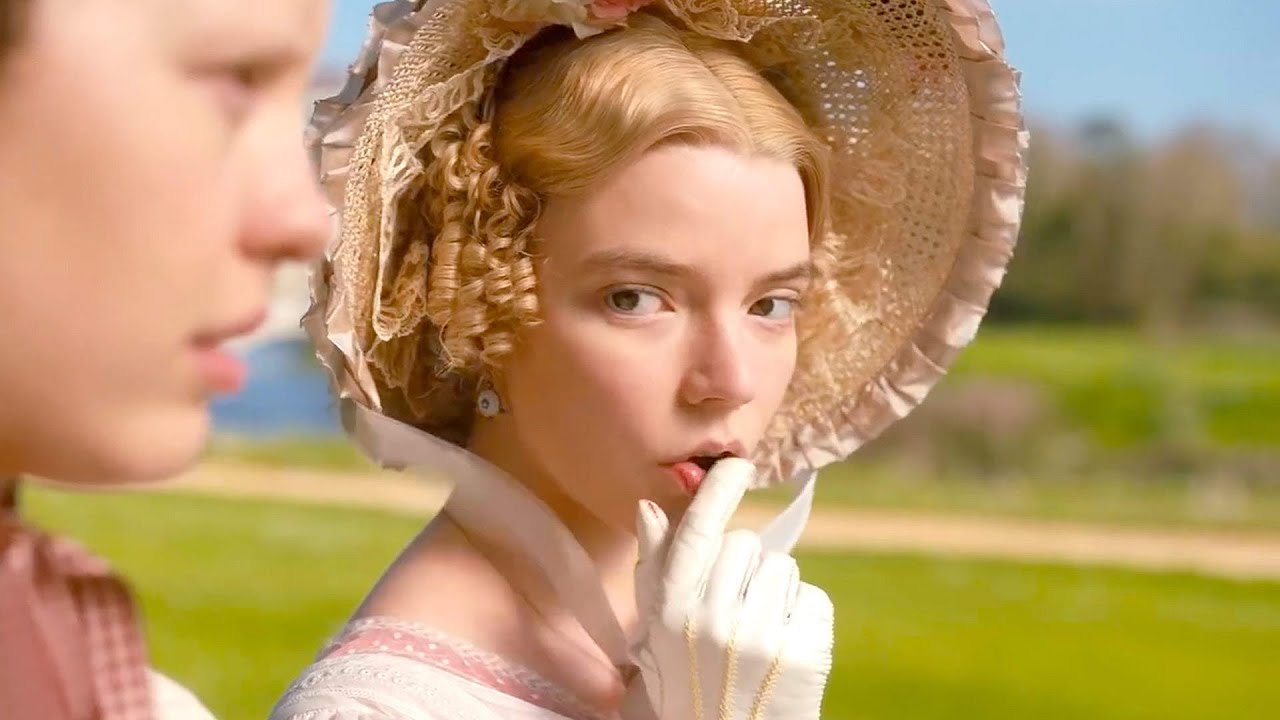 “Emma Woodhouse, handsome, clever, and rich, with a comfortable home and happy disposition…had lived nearly twenty-one years in the world with very little to distress or vex her.”

So begins Jane Austen’s final novel, and so too starts Emma., with text across the screen that almost seems to smirk. We find Emma as she is described: beautiful, put together, and just mischievous enough. She is also vain, childish, and compulsive in a way that mysteriously endears you to her. Anya Taylor-Joy (The VVitch, Thoroughbreds) delivers a masterful performance that is always on the verge of a laugh or a tear, depending on which way the day goes.

Well matched in chemistry and in his ability to show an astonishing depth beneath the veneer of decorum is Johnny Flynn as George Knightley. I have loved Flynn since Lovesick was titled Scrotal Recall (yes, really), and his performance in Emma. is earnest and authentic as always.

The character growth, across the cast but most importantly for Emma and Knightley, is masterfully done by both and makes this one of my most favorite period pieces. There are no nonsensical professions of love, you can see every spark light and burn – even in the slightest nods and prolonged bits of eye contact. Josh O’Connor so well telegraphs his nervous and misplaced intentions as Mr. Elton, that it’s even funnier that Emma is in the dark ’til the end.

Supporting the hilarious, heartfelt journey is a cast of wild and weird characters with impeccable timing, namely Bill Nighy as Mr. Woodhouse, Mia Goth as Harriet Smith, and Miranda Hart as the unfathomably lovable Miss Bates. In fact, it is the background of Emma.’s tapestry that makes the story so vibrant. So rarely do the wealthy find themselves truly alone, and director Autumn de Wilde capitalizes on the presence of society members and household staff alike—often out of focus but still on screen—to mine even more comedic opportunities.

In her first full length feature, de Wilde deftly uses the camera to double down on subtext and deepen the most important moments. Her use of camera emphasizes the screen as its own type of narration and honors the story’s origin as a novel. Eleanor Catton’s debut screenplay expertly weaves the multitude of characters and circumstances. Neither de Wilde nor Catton is afraid to slow down and strike a vignette, but the pacing is only occasionally labored, as the gorgeous cinematography and costume design alike provide plenty to gawk at.

Finally, I would be remiss to leave out the score, which has its own humor and cagey attitude to support the litany of other masterful elements. The entire production has a beautiful, rhythmic choreography to which all things, movement, people, and intentions, inevitably adhere.

I often both benefit and suffer from being sporadically read. As George Knightly muses, “Emma has been meaning to read more ever since she was twelve years old.” Me too, bud. I’ve never read Emma, or seen an adaptation, so I can’t tell you how well this holds up to the source material. Based on the reactions of the mostly middle-aged female audience in my showing, it holds up marvelously. Based on my own viewing, this is a charming, funny, and soon-to-be-classic viewing experience for anyone.