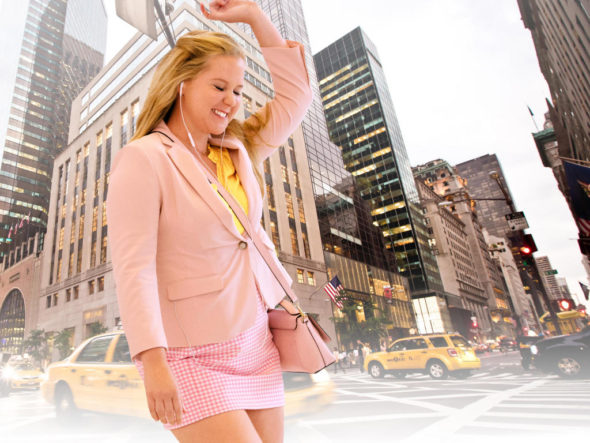 Trainwreck, the 2015 big-screen break out for comic Amy Schumer (and LeBron James and John Cena) offered a wise about-face for the rom-com.

Written by Schumer, the film simultaneously embraced and subverted tradition by basically casting a female in the traditionally male role of eternal adolescent who accidentally finds love and, therefore, adulthood.

She returns to the romantic comedy with I Feel Pretty, film that is neither romantic nor comedic, unfortunately.

So there’s your first problem.

I will give writers/directors Abby Kohn and Marc Silverstein credit for one thing. When Bennett hits her head at a spinning class and wakes up believing she’s traffic-stopping gorgeous, at least the film does not stoop to showing us the flawless physical image Renee sees in the mirror. Thanks for that.

So, it’s only after a traumatic brain injury that Amy Schumer can consider herself attractive.

Now she has all the confidence she needs to go after that receptionist gig at the big cosmetics firm. (Wait! A romantic comedy where a receptionist can afford a small but cool NYC apartment? Yes, that checks out.)

Things take a turn for the better whenever CEO Avery LeClair (Michelle Williams) appears onscreen. Her weirdly spot-on performance as the baby-voiced heiress is a riot—and the only unpredictable moments in the film belong to her.

Schumer does what she can with this superficial, blandly rote script. She has excellent chemistry with her co-stars (Busy Phillips, Aidy Bryant, Rory Scovel), regardless of their underwritten roles. But when you have a comic talent like Schumer on the bill and you still cannot think of anything funnier than seeing a pretty woman fall down, your writing is weak.

Let’s not even address the fact that all Renee wants in life is to work for a cosmetics company and maybe, if we all dream big enough, she might be the new face of a cosmetics line!

In summation, I Feel Pretty is Big meets Shallow Hal, if those films suggested that all Tom Hanks needed was confidence enough to believe he should be objectified, then all would be well.