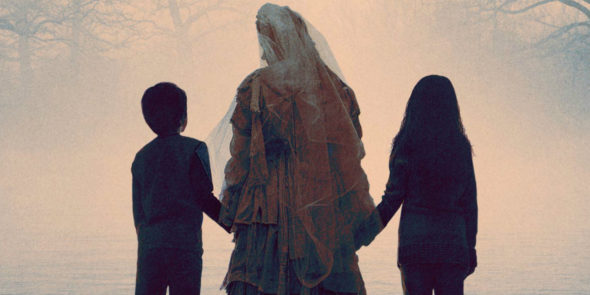 The Conjuring Universe loves the Seventies, doesn’t it? And why not? So many patterns to distract attention from your evil, so many bell bottoms to hide beneath. It’s also a time period before Catholicism became a horror movie unto itself, which makes it a safer space to depict a more wholesome view of the Church.

Not that Anna (Linda Cardellini, Green Book) would know. Her late husband was more of the religious one. But as Fr. Perez (Tony Amendola, Annabelle) points out, “You don’t have to be religious to have faith.”

And yet, there is something of the old school charm that marks the best films in the Conjuring universe on display here. Simple fun house scares, primarily practical effects, kids in peril—these are all invoked in a quickly paced if somewhat nonsensical and conveniently plotted ghost story.

There is also a quick Scooby-Doo reference (this being 1976). Have you ever wondered why Cardellini always looks so familiar? Because she was Velma in the film series—making her sort of my own personal hero—and I, for one, was thrilled that LLL shouted that out. Plus, good parenting.

The story unfortunately skirts the real tensions to be drawn from questioning her parenting skills. Not that  LLL had a shot at reaching the terrifying heights of The Babadook, but for a moment it takes us down the path of calling a single parent’s fitness for the job into question.

This is quickly abandoned for the safer territory of a fierce mother protecting her cubs, which is too bad because Cardellini’s understated and graceful performance could probably have carried a more challenging script.

Instead we get bits and pieces of other films in the series, stitched together by a folk tale about a murderous mother. This is not inspired horror, but it’s not ridiculous, either.

Subscribe in a reader
← Is That What I Smell?
Polar Pop →
Scroll Up