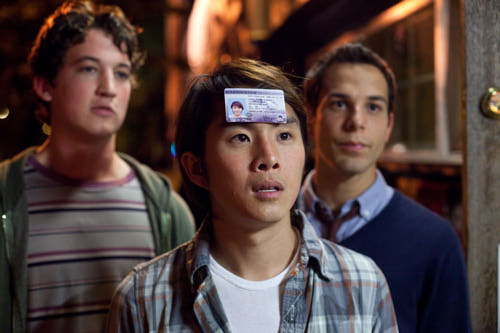 If your name happens to be Randy, you’ll get some extra chuckles out of 21 and Over, thanks to a running gag about a d-bag of that name and his overly supportive friends.

For you non-Randys, the first directing effort from a seasoned writing duo will seem plenty familiar. It is  funny in spots, it’s just not too concerned with doing anything remotely original.

Jon Lucas and Scott Moore boast a resume full of comedy screenplays, some very funny (The Hangover, The Change-Up) and some..not so much (Ghost of Girlfriends Past, Four Christmases).  For their first foray into directing their own script, they don’t stray far from the comfort zone of bawdy dude humor and beer-fueled mayhem.

Stressed out college boy Jeff Chang (Justin Chong) has no plans to hit the bars on his 21st birthday, thanks to a big job interview his taskmaster father has arranged for early the next day.  This doesn’t sit well with Jeff’s buddies Miller (Miles Teller) and Casey (Skylar Astin), and as they coax Jeff out for “just one beer,” the night goes horribly wrong in record time.

The drunken adventure unfolds with plenty of nods to Weekend at Bernie’s, Animal House and of course, The Hangover, as Lucas and Moore unveil most of the shenanigans via the “what happened before” angle of their biggest hit. What’s missing from this, and all, Hangover imitators, though, is the sharply drawn characters and the talented chemistry of the actors.

21 and Over does earn an “A“ for effort, painting Miller as the crazy party-hound, Casey as the good-hearted nerd, and JeffChang (always called by this one name, which remains funnier than you might think) as the nutty Asian guy because, you know, The Hangover had one. No Mike Tyson? What gives?

Teller also starred in the high school party flick Project X, and he seems to relish playing a character with more of a grown-up edge.  He goes a bit overboard though, as Miller’s obnoxiousness nearly renders the character unlikeable.  Astin is basically recycling his nice-guy role from Pitch Perfect while Chong, when his character isn’t passed out entirely, does manage some humorously unhinged antics.

Ironically, Lucas and Moore may have been better suited to follow Project X’s lead and offer no apologies for the debauchery. Ultimately, though, they can’t resist lessons about maturity as they chase the cheesy “I’ve learned something today” moment.