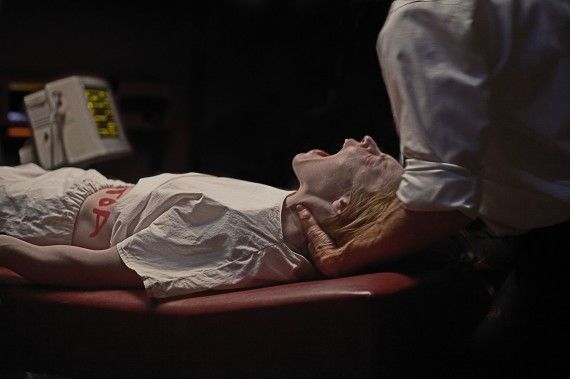 Three years ago, an indie flick took a few well-worn concepts – found footage, cults, backwoods spooks and Satan – and pieced together the surprisingly creepy The Last Exorcism. This weekend, its sequel, The Last Exorcism Part 2: This One’s Really the Last (they may have dropped that subtitle), shares what happened next to poor Nell Sweetzer and her demon lover.

The original benefited from performances far superior to the source material. Not only was Bell tender, vulnerable, brittle and oh-so-contorted-and-creepy, but her co-stars were magnificent. Patrick Fabian, in particular, as the charlatan exorcist finally coming clean, gave the film a heartbeat.

Unfortunately, those characters all died in the first movie, leaving Bell with little more than a new, uninteresting director; a new, uninspired set of writers; and a new, mostly bland cast to help her finish up Nell’s tale.

Unconvincingly playing a character ten years her junior, Bell struggles to create the believable center needed to anchor nutty horror shenanigans. She gives a solid performance – again fragile and yearning – but the contortions are gone.

What? Well then, why the hell even do this? What’s the point in making an exorcism film if we never get to see the possessed writhe around, snapping joints and freaking us all out?

That’s just one of the unexplained mysteries the film poses. Others include the age old: what possesses parents to taking their bottle-drinking tots to late night screenings of horror films? What is an audience member to do when the toddler screams in genuine terror throughout most of the film? How wrong is it to slap a mother in the face when she says, loudly, to her man, “I don’t know what the fuck’s wrong with him?” The baby. She’s talking about her terrified baby, (up way past his bedtime, no less).

Mother of the year, people. Womb of a future mass murderer.

The sad thing is that her negligence was more interesting than the film. So why fork over the cash to see this one in the theaters when you can be equally horrified by the behavior of some white trash family? Surely it’s cheaper to find one of those.