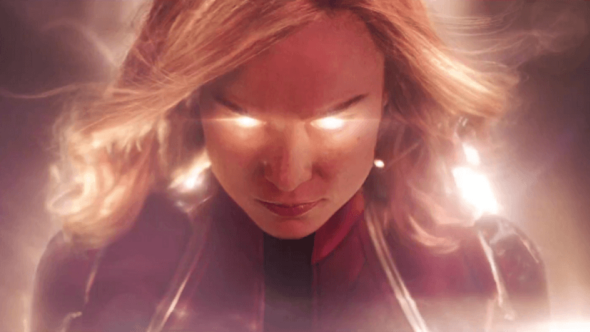 We had very high expectations for Captain Marvel.

Because showcasing this historic, female Marvel hero offers the chance to see everything from a new lens?

That’s awesome, but no.

Because Oscar-winner Brie Larson is always a kick and we could not wait to see what she could do with such a big movie?

We were pumped because writers/directors Anna Boden and Ryan Fleck are amazing filmmakers and we always, always have high expectations for their work. Who cares that it‘s a superhero movie? True, they’ve made their names with indie standouts (Half Nelson, Sugar), but we were betting they could move the setting to “blockbuster” and keep their character-based storytelling instincts.

After a wobbly start, that bet pays off.

So does Larson. She commands the screen—not to mention earthlings and aliens alike—and is a flat-out gas as Carol Danvers/Captain Marvel. Even better is the way Boden and Fleck address sexism with a character who’s basically just always pissed off.

Grunge is a thing because Captain Marvel wallows gleefully in all things 90s – especially the tunes. A glorious action sequence set to Gwen Stefani’s “Just a Girl” is a high point, and could’ve rivaled Kingsman‘s “Free Bird” segment if given a Skynyrd-level running time (lighters down, please). A needle-on-turntable shot seems a bit out of place, but hey, that Nirvana tune that follows goes down just fine.

The throwback vibe entertains and the clever soundtrack kicks all manner of ass—as does Marvel. The humor feels mostly right, the galactic tensions carry greater weight as the film progresses, and both the mid and end credits stingers are winners.

Boden and Fleck (with co-writer Geneva Robertson-Dworet) streamline Danvers’s comic book history effectively, but as is often the case with these origin stories, act 1 still sputters, betraying a lack of intergalactic vision (or too much of a fondness for cheap-ass Star Trek movies). Once Vers (The Captain’s pre-metamorphosis name) hits earth and some deeper themes are woven into the fun, Captain Marvel finds its groove.

Much of that is thanks to Jackson, whose chemistry with everyone is his trademark in films, and his screen time with Larson is always a sparkling, witty treat. Because of its time stamp, the film can also craft an engaging origin story for Fury, Coulson (Clark Gregg) and the entire Avengers project, aided by continually amazing advancements in digital fountains of youth.

Jude Law, Annette Bening and Lashana Lynch sparkle in a supporting cast buoyed by Ben Mendelsohn’s welcome presence. Playing sometimes with, and sometimes against type, he reminds Big Box Office audiences that he’s so much more than his scenery-chewing villains of late. (Boden and Fleck, who cast him in their amazing poker flick Mississippi Grind, already knew this.)

So, over 20 films and DC’s Wonder Woman success later, the MCU offers its first female lead, a fact certainly not lost on Boden and Fleck. They pull no punches when it comes to the idea of heroism: question authority, don’t let anyone tell you what you can and can’t accomplish, fuck mansplaining. Oh, and heroes rescue refugees, they don’t cause them more suffering.

And as much as Wonder Woman earned its acclaim, Marvel manages to one-up DC yet again. Captain Marvel is anchored by even more unabashed girl power, and stands strong on its own while whetting your appetite for what comes next.

← Visions of the Past
Swallowed Whole →
Scroll Up