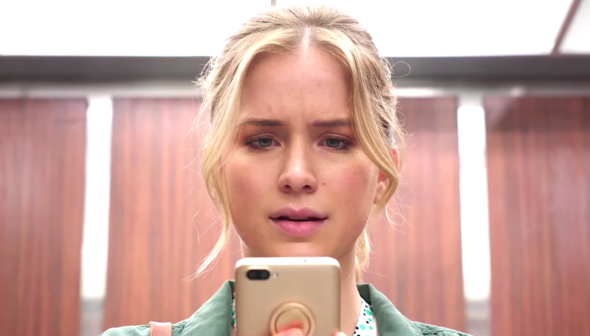 Who takes the time to read all those terms and conditions, amirite?

Countdown knows we just agree without reading, and has a little fun with the notion that some of us could pay for that….WITH OUR LIVES!!

Smartphones have become such a crutch in everyday life that “our phones want to kill us” is an inevitable – and perfectly understandable – horror premise. For his first big screen feature, writer/director Justin Dec uses it as the basis for a rewrite of The Ring with an unexpected side trip into Conjuring territory.

The mysterious death of one of her patients leads Quinn to download the urban legendary Countdown app. The verdict? Less than three days to live, which means Quinn and the similarly-fated handsome dude she met at the phone store (Jordan Calloway) have to learn the origin of the video tape I mean phone app so they can figure out how to opt out without penalty.

Look, The Ring was great PG-13 horror (in fact, one of the best). While Countdown isn’t nearly as effective, it gives today’s high school horror crowd their own version, and some decent creeps and jump scares to spur date-clinging.

For the rest of us, the film benefits from the comic relief of one smug phone guy (Tom Segura) and a priest (P.J. Byrne) who’s eager to battle demons. And it’s when those demons are conjured that Countdown finds a fun groove to call its own, with Dec ultimately managing to write himself a clever enough way out of these deadly terms and conditions.

So read before signing, or you never know what’s next.