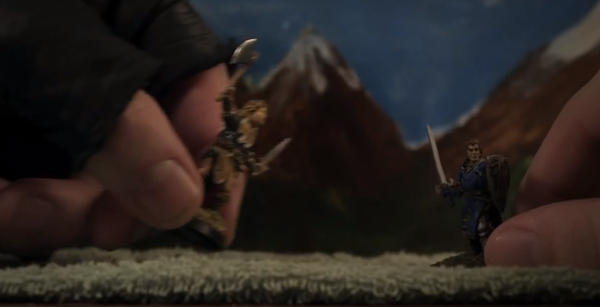 Here’s how much of a gamer I am not:  it took years -check that- decades for me to realize the great “zero charisma!” taunt from Elliot to his brother in E.T. was a Dungeons & Dragons reference.

In the film Zero Charisma, “Game Master” Scott (Sam Eidson) isn’t interested in D&D either. Instead, his world revolves around the role-playing board game he himself invented and plays regularly with three other social outcasts. If you’ve already guessed that Scott is a full grown man who still lives at home, give yourself ten “I know a guy like this” points.

Suddenly, there is a disturbance in the force, as one of the regulars has to drop out of the ongoing contest. A chance meeting with Miles (Garret Graham) leads to Scott extending an invitation he soon regrets.

Miles is smart, funny and sociable. He brings beer over and has a sexy girlfriend who apparently has a healthy sexual appetite. “You know what that’s like!” Miles exclaims to the group.

If the resulting open-mouth stares of wonder are any indication, no, they do not know what that is like at all.

The harder Scott tries to control his world, the more it falls apart, as writer/co-director Andrew Matthews, in his debut feature, displays a nice feel for social satire and dark comedy.  The game of “Scott vs. Miles” overshadows the role-playing exercise, as Scott becomes even more unlikeable, preying on his friends’ insecurities in an attempt to convince them that Miles is not what he seems.

Zero Charisma is often able to shine an uncomfortable light into the dark corners of alienation and social responsibility. Though it pulls back a bit at the finish to ensure matters are properly tidied up, Game Master Sam’s world is worth looking into.