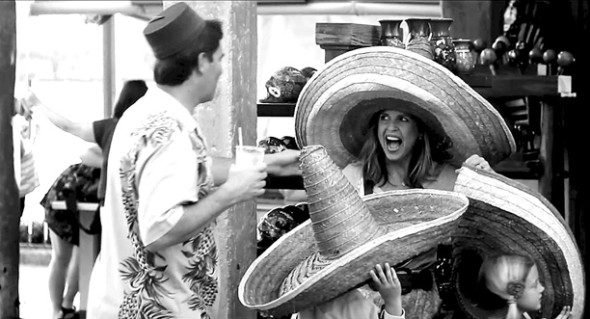 And the award for “Best Gimmick of the Year” goes to..Escape from Tomorrow!

Seriously. In his first project, writer/director Randy Moore risked the wrath of Mickey and covertly filmed inside Walt Disney World, piecing together the story of a family vacation gone very, very weird.

There’s really no point in trying to describe it any other way.  Even if the plot could be summarized, it would spoil the perverse joy of watching the film go places you can’t possibly see coming.

The acting is pedestrian at best, some of the segments not filmed at the theme park have laughably low production values, and Moore’s overall point gets muddied in the madness.

Does he hate the Disney machine and all it stands for? Is he using the resort to make a larger point about consumer culture running rampant? Or, does he just want to produce something unique, and have a little Goofy fun at the expense of an American institution?

It often seems as if a point was secondary, an afterthought to the fun of getting away with filming under Disney’s nose.  Moore gives the movie alternating streaks of satire and outright contempt, but cannot cannot find the cohesive voice needed to make it all work.

It’s a shame, because Moore was onto something here. As the film begins, you’re excited at the possibilities of what he is doing, only to have your enthusiasm strain under the weight of weirdness.

Still, Escape from Tomorrow offers a few low-brow laughs and a film experience that is truly unlike any other. If that’s enough for you, well, hey, it is a small world after all!