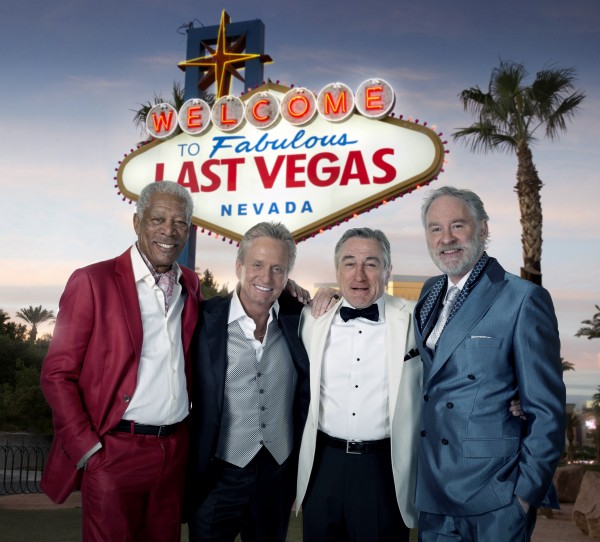 By the end of Last Vegas, you get the feeling everyone involved had a darn good time filming it. Robert DeNiro, Michael Douglas, Morgan Freeman and Kevin Kline got to hang together in Vegas for a few weeks, give the script the half-hearted effort it deserves, and leave happy.

Nice work if you can get it, too bad their fun doesn’t rub off on the rest of us.

The four Oscar winners play Paddy, Billy, Archie and Sam, lifelong friends who agree to meet in sin city for a..what else-bachelor party-just before Billy (Douglas) marries a woman less than half his age. Paddy (DeNiro) is still mourning the loss of his wife, while Archie (Freeman) is running from his overprotective son and Sam (Kline) has been given a hall pass by Mrs. Sam.

The guys are in Vegas about thirty seconds when they meet a beguiling lounge singer (Mary Steenburgen, making it 5 Oscar winners wasted in this cast) who is of course more than willing to be the Shirley MacLaine in their Rat Pack.

All these vets together on screen should be more of a hoot, but Dan Fogelman‘s screenplay never gives them the chance.  Instead, we get lazy age gags, sit-com obviousness and force fed attempts at character development.

Fogelman is an odd bird. He’s capable of smart, nuanced efforts such as Crazy, Studio, Love., but is just as likely to churn out losers the likes of The Guilt Trip. Last Vegas is closer to the latter, with a dependency on telling you about the characters when showing you works so much better. Throwing us a funny bone or two would also have helped.

Director Jon Turtletaub (National Treasure/The Sorcerer’s Apprentice) is content to keep his eyes on the wrap party, as the slapped- together scenes shine with the polish of one, maybe even two full takes.

Look, this is a Vegas bachelor party movie, so I gotta say it:  The Hangover may not have invented the niche, but it damn sure perfected it.  Strangely, by lifting a couple scenes from that film, Last Vegas seems to invite the comparison.

Not a good idea.