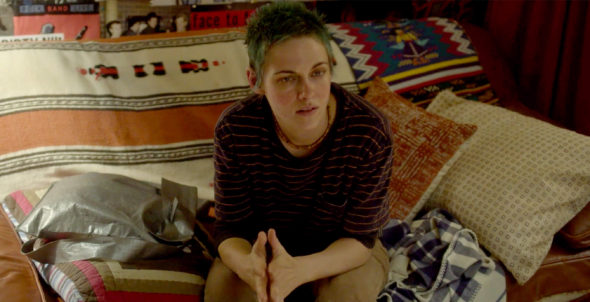 Do you remember the JT LeRoy hubbub? Maybe you confuse it with the similar hullaballoo surrounding James Frey, author of A Million Little Pieces, the memoir that turned out to be highly fictional?

More than the nom de plume used to pen Sarah and The Heart Is Deceitful Above All Things, LeRoy became Albert’s literary persona. Albert herself didn’t exist in this world. She became LeRoy, the writer of lurid “autobiographical” pieces that, together with a mysterious nature, won the hearts of readers, media and celebrities alike.

In fact, Jeremiah Terminator LeRoy became so popular that he had no choice but to show his nonexistent face.

The weird true-life tale of LeRoy’s fake-life tale has been documented twice in works of nonfiction (the documentaries The Cult of JT LeRoy and Author: The JT LeRoy Story, both worth viewing). Director Justin Kelly is the first to make fiction of the fiction with his aptly cast film, J.T. LeRoy.

Though the film doesn’t offer a great deal of insight beyond what you can glean from the two documentaries, it takes Knoop’s point of view for a refreshing change of pace. But its real strength is the film’s cast.

Kristen Stewart makes the ideal choice to play Savanna/JT. Effortlessly androgynous, moody, sensual and conflicted, Stewart gives the character a vulnerable center, balancing Knoop’s motivation between a sense of duty to Albert and a personal longing for artistic expression.

Naturally, Laura Dern shines, stealing scenes and oscillating between free spirit and opportunist. She does a fine job of illustrating Abbot’s view of creating this other personality who can take on her own pain, can amplify that pain and turn it into both an escape and art. At the same time, Dern’s the schemer, the survivor manipulating those around her. It’s interesting the way the veteran character actor weaves between artist and manipulator in a context that questions the difference between fiction and fraud.

The two leads become a great point/counter point and the film is strongest in their shared scenes. When JT wanders off alone, burdened by puppy love or struggling to keep up a persona of another’s creation, a certain spark goes out.

That’s not to say that the balance of the cast falters. Diane Kruger is particularly slippery as Eva, a thinly veiled version of Asia Argento. But as intriguing as her interplay is with JT, you miss the constant push and pull of wills when Stewart and Dern work off each other.

← Don’t Open Until Christmas
All In →
Scroll Up