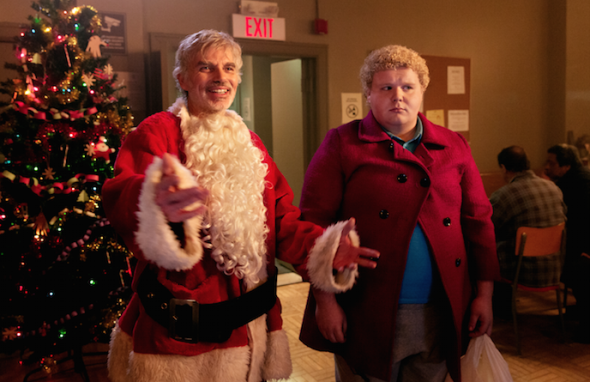 Thirteen years after showing us that it’s probably not a candy cane in his pocket, Bad Santa is back for more naughtiness.

Yep, which is just one of the reasons BS2 smells more like desperation than inspiration.

The always charming Willie Soke (Billy Bob Thornton) is trying to end his miserable life when Thurman Merman (Brett Kelly) walks in to offer him a sandwich and let Willie know that his old friend Marcus needs a meeting pronto.

Marcus (Tony Cox) says there’s an easy score of at least 2 million bucks waiting at a charity in Chicago. All they have to do is put the old suits back on, ring some bells for donation money and then rob the safe on Christmas Eve. Once in Chi-town, Willie learns the part Marcus left out. They’ll be working with Willie’s long-estranged and equally charming mother Sunny (Kathy Bates), who has organized the whole plan.

Then Thurman makes the trip from Arizona to be with Willie on Christmas, and the gang is back together!

Well, some of the gang, but not nearly enough.

Part one was more than just a hilariously shocking mix of the sacred and the profane. Director Terry Zwigoff and original writers Glenn Ficarra and John Requa put some subversive social commentary alongside distinct supporting characters that were perfectly fleshed out by the likes of John Ritter and Bernie Mac.

BS2 finds director Mark Waters (Mean Girls, Vampire Academy) and a new writing team not thinking any deeper than being crude and having Kathy Bates in the cast. The characters are thin, the plot is contrived and few of the jokes find a mark. Worse than that, the bad boy charm from BS1 is long gone, replaced with an unsavory streak of mean.

And then there’s Thurman Merman. He was the MVP of Bad Santa, so you can’t really have a sequel without him, yet there’s no way to recreate that magic. Thurman was 8 back then, and his unending belief in a “bad” Santa created a sweet conflict that felt impossibly real and drove the film. Sure, it’s a kick to see him at age 21 but beyond that, the writers can’t seem to decide how the character fits in anymore.

Much as I wanted to believe in Bad Santa 2, it’s just too much of an empty suit.