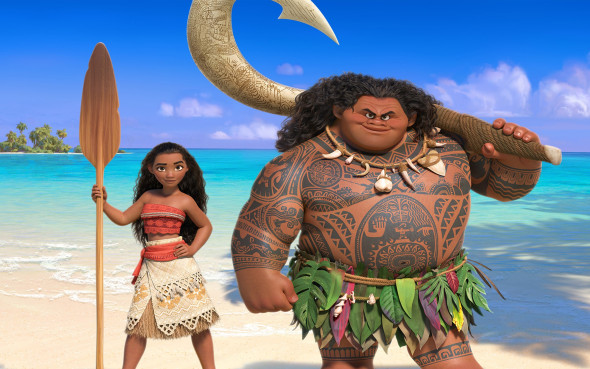 Disney’s no Pixar, but in 2016 that doesn’t seem to matter. In an ocean of excellent animation this year, Disney’s Zootopia stands out as quite possibly the best – certainly the most relevant. While their holiday release, Moana, returns to some tried-and-true-and-tired tropes, it frees itself often enough from Disneyisms to become yet another strong ‘toon from the studio.

The animation behemoth never strays for too long from its merch-encrusted path. Yes, Moana (Auli’i Cravahlo) is a Disney princess. She’s the daughter of a Polynesian chief, but as demigod Maui (Dwayne Johnson) points out, “You’re wearing a dress, you have an animal sidekick – you’re a princess.”

Yes, she’s a princess who yearns for more than the responsibilities life affords her. (Mercifully, that dream never does involve a beau.) There are songs of self-actualization and the thrill of adventure. There’s a lot that’s familiar.

Set generations ago in the Polynesian islands, the film tells of the ancient demigod Maui – a shapeshifter who used his magical fishhook to steal the heart of the earth goddess, dooming the islands to eventual peril. Moana is called by the sea to find Maui, retrieve his hook and return the heart to save her people.

Moana draws comparisons to The Little Mermaid, Aladdin, Pixar’s Brave – hell, there’s even a bit of Mad Max on the high seas (nice!). But the film ultimately carves out its own presence, partly due to a refreshing cultural change.

Jemaine! The always welcome Jemaine Clement voices one of the many dastardly creatures Moana and Maui encounter on their trek, and he’s almost Tim Curry glorious. (He also has the best song in the film.)

He’s just one baddie in a film littered with fascinating menaces – from the coconut pirates (no, they don’t steal coconuts – they are coconuts) to various undersea dangers to the lava demon the heroic duo must defeat to save the world.

Johnson steals most of the film. With broad humor to match Maui’s enormous, ornately tattooed body, his chemistry with the teen voyager is nearly as entertaining as his struggles to shape shift.

The film has its troubles, including a slog of a first act, but Moana contains more than enough freshness to offset its weaknesses and guarantee holiday family fun.