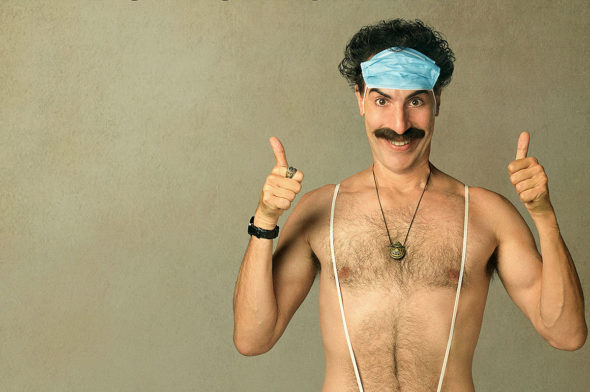 You may have already seen a headline or two about Rudy Giuliani’s run-in with Sacha Baron Cohen as Borat.

When it happened this past July, Giuliani called the cops, and then boasted that Cohen didn’t “get him.” But now that Subsequent Moviefilm is here, we see Giuliani still lives in a world unhindered by reality, and Cohen still has a knack for finding cringeworthy humor in the most unseemly situations.

Much as changed in Borat’s world – and ours – since his 2006 adventure brought shame to his native Kazakhstan, and earned him a life sentence of hard labor. But now, with the American president’s fondness for dictatorships, Borat has a chance for redemption.

He must return to America, and get Kazakhstan on the short list for Trump’s “strongman club” by bribing Vice President Pence with a valuable offering.

Borat’s special delivery during Pence’s CPAC speech (beautifully synched to a COVID-19 reassurance of being “ready for anything!”) is rebuffed, so Giuliani becomes the next logical target.

And that road to Rudy is filled with Cohen’s fearless hijinx, again skewering the breeding grounds for bigotry, ignorance, misogyny, anti-semitism, QAnon, Karens and..what else ya got?

But Borat is pranking a meaner America this time. There are no layers to peel away anymore, the ugliness is out and proud. From a bakery to a pregnancy center to a Tea Party rally, the often hilarious audacity is tempered by the sadness of realizing we no longer need Borat to expose this underbelly.

So Cohen and director Jason Wolinar (a TV vet helming his first feature) make a smart and subtle pivot. Segments with Tutar’s “babysitter,” and another featuring two elderly Jewish ladies in a synagogue (one of which the film is dedicated to) mix the bracing humor with moments of touching sweetness. Cohen’s not going soft, just pausing to remind us there is hope.

Early on, Borat has to run from random Americans excited to see him on the street. It’s a refreshing acknowledgment that we’ve seen this schtick before. Yes, it’s still shockingly brazen and often laugh out loud funny, but the thrill of discovery is naturally gone.

But whether he’s Cohen posing as Borat or Borat posing as Cliff Safari (or John Chevrolet, take your pick), the comedy and the tragedy are nearly impossible to ignore, even if you want to.