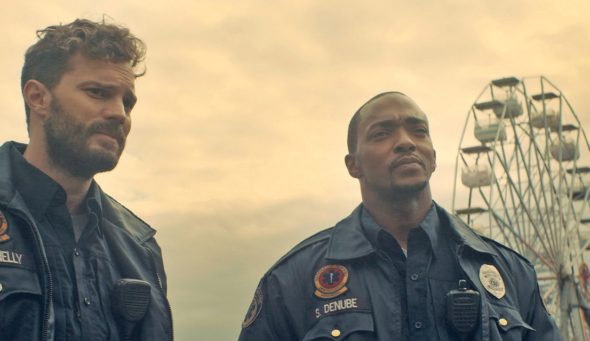 Has it really been three years since filmmakers Justin Benson and Aaron Moorhead took us on the UFO death cult head trip that was The Endless?

It’s hard to tell with these guys. They really like to play with time.

Another riff on the same theme, Synchronic is a sci-fi fantasy about parallel dimensions and time travel—plus bath salts.

Steve (Anthony Mackie) and Dennis (Jamie Dornan) are best friends and NOLA paramedics, each facing his own existential crisis. Dennis can’t seem to move past the fear that he’s settled: for his wife, his job, his life. Meanwhile, Steve—whose existence of work, drink and women long ago ceased to have meaning—gets a medical diagnosis that has him rethinking everything.

So far so ordinary, but if you’ve seen anything these filmmakers have done (and you should see everything), you know something seriously weird is coming.

The film’s conceit is a fascinating one, and every grisly crime scene offers a curious clue that may eventually help Steve solve a mystery that gives him purpose and redirects his bestie. Benson, who writes and co-directs, offers plenty of opportunity for mind-bending action and wild set pieces.

He and co-director/cinematographer Moorhead cut back and forth through time to keep you guessing as to the mystery developing, but what’s left underdeveloped are the characters.

Two of the filmmakers’ previous three efforts focused on a pair of men linked through time and experience to the other—best friends in Resolution, brothers in The Endless. This kind of relationship has proven a beautiful anchor for their trippy plots, but Synchronic doesn’t invest enough time or attention to Steve and Dennis’s characters.

Both Mackie and Dornan are solid enough, but their chemistry is weak. The time-worn friendship is more discussed than exposed. Worse, Synchronic is the first of the filmmakers’ movies to lack a robust sense of humor. And it is missed.

The result is a sometimes dour though mainly melancholy effort that feels far less original than it really is. Synchronic is clever, to be sure, and at times quite touching. But for filmmakers who’ve until now positively dripped with inspiration, it feels like a step backward.