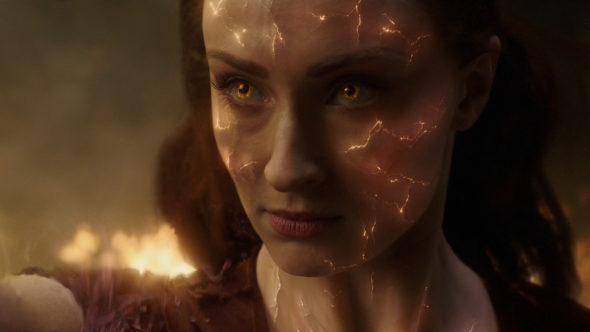 Hey, remember back in ’06 when director Brett Ratner and writer Simon Kinberg crashed the X-Men franchise into oblivion by telling the story of how the perpetually boring Jean Grey was really the most powerful of all mutants, plus maybe she was bad, and not even the love of two good mutants and the misguided belief of Dr. Charles Xavier could save her?

You don’t?! Because it was so bad it tanked the promising series until director Matthew Vaughn revived it five years later with Ashley Miller’s clever time warp, X-Men: First Class. Then there was another good one, then a terrible one—basically, we’re back on that downside of this cycle.

So why not put some polish on that old turd about Jean Grey, and this time give it the overly ominous title Dark Phoenix?

Some elements are the same: Jean’s powers are beyond anyone’s control and there’s a dark power that’s overtaking her. But this go-round, writer Kinberg also makes his feature debut behind the camera, spinning a yarn with more aliens, more girl power and less Wolverine.

The writing is just as bad, though.

How bad? Exposition and inner monologues continually jockey for position, with lines bad enough to choke even the bona fide talent of Jessica Chastain, who joins the fray as alien leader Vuk.

Sophie Turner returns as Jean – the role she took on in 2016’s abysmal X-Men: Apocalypse – with little more charisma than she wielded three years ago. James McAvoy, Michael Fassbender and Jennifer Lawrence all also return because, one assumes, contracts are contracts.

There’s really no excuse for a film with this cast to fail, but Kinberg’s story weaves and bobs with no real anchor, all the veterans repeat the same old conflict/guilt/resolution spirals and the newbies simply lack the charisma to draw attention away from the weakly choreographed set pieces.

Okay, some of the mutant vs. alien throwdown on a moving train has zip, but it’s too little, too late.

By then the attempts to make us care about a character that’s always been lacking in investment – for us and these X superfriends – have pulled up lame.

← How the Heck Are Ya, Bill?
Like There’s No Tomorrow →
Scroll Up