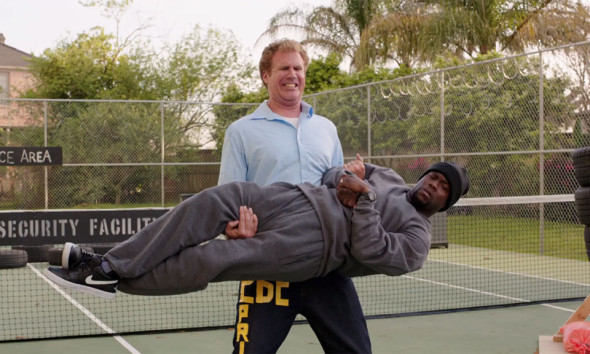 A lump of coal on Christmas Day. Ten thousand spoons when all you need is a knife. The movie Get Hard.

What are huge disappointments, Alex?

Will Ferrell and Kevin Hart are two of the funniest people around, and it’s easy to see the potential in an onscreen teamup. The problem is the project that brought them together should have died in the idea phase.

Ferrell is James King, a high-rolling hedge fund manager who lives in luxury but still can’t please his trophy girlfriend (Alison Brie). At their lavish engagement party, right in the middle of jamming on guitar with John Mayer, James is hauled away by the Feds and charged with securities fraud.

Ignoring his lawyers advice to take a plea deal, James is found guilty and sentenced to 10 years in San Quentin. Given 30 days to report, James turns to Darnell (Hart), the guy who details his car, to teach him how to survive inside.

See, Darnell is black, so James just assumes he’s been in prison, and that’s just one of the stereotypes the film tries, and fails, to have fun with. In the right hands, race, class and sexuality can be fertile ground for sharp comedy. Those hands never touch Get Hard.

Ferrell and creative partner Adam McKay (who gets a story credit) have been on target before, even managing to work some scattered moments of social commentary into their hilarious lunacy. The mistake may have been relying too much on director/co-writer Etan Cohen, who shows no instinct for restraint. The film is overplayed on all fronts, giving it a crass, borderline nasty and often humorless air.

With the “revenge of the common man” storyline you get the feeling the intention here may have been an updated Trading Places. It isn’t long, though, before you wished they’d have just done a straight-up remake, and spared us the buzzkill that is Get Hard.

← It Has Sprung
Scared Single →
Scroll Up