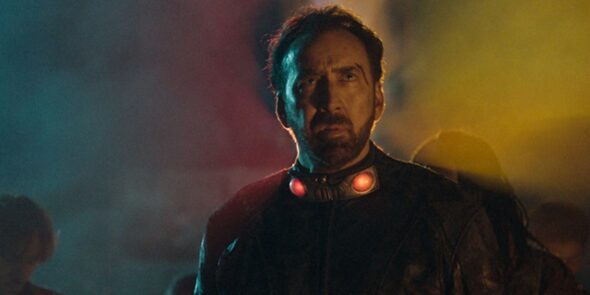 Prisoners of the Ghostland

Nicolas Cage referred to Sion Sono’s Prisoners of the Ghostland as possibly the wildest film he’s ever been in.

Wilder than Wild at Heart?

Wilder than – I mean, it’s a long list. We’re talking about Nicolas Cage here. But Sono (Suicide Club, Antiporno, Tokyo Vampire Hotel, Why Don’t You Play in Hell, among others) is no slouch in the wild department. So, it would seem that he and Cage make a suitable match.

Sono’s tale pits dastardly bank thief and all around nogoodnik Hero (Cage) against the clock, testicular bombs, and marauding trucker ghosts. Why? To return The Mayor’s (Bill Moseley) beloved granddaughter Bernice (Sofia Boutella) back to him.

If that sounds simple enough —and it probably does not— the film’s even more unusual than the synopsis suggests. Prisoners of the Ghostland delivers a samurai cyberpunk musical Western dystopian neo-noir with flourishes reminiscent of Mad Max and Mulan Rouge.

I wish that mashup worked better.

The Mayor rules Samurai Town, a garish din of debauchery, color and indulgence. Here Sono delivers bold and bizarre visuals. He runs with the idea that the samurai and the cowboy are essentially, cinematically, the same beast.

Bernice is held in Ghostland, all ash and cinder populated as much by mannequins as humans. Haunting imagery here as well, though less of it unique, marrying Western to dystopic fantasy. Plus the Greek chorus.

Compared to Sono’s madcap antics, Cage is almost subdued. Does he ride naked on a child’s bike? Grapple with toxic mutant monsters? Sing? He does! It’s just that Sono’s vision is wilder still.

The filmmaker’s aesthetic is jarring, disjointed, overwhelming, frenetic, sometimes stupid, other times glorious, and never less than mad. The fact that he tries to tie it all together neatly at the end may be Prisoners of the Ghostland’s biggest drawback.

The underlying story is of trafficked women taking control of their lives and bodies, though the fact that Boutella is essentially voiceless and in need of saving speaks louder about the film’s themes. She does a solid job in a thankless role, as does everyone in the densely populated ensemble.

It’s bananas It doesn’t entirely work – sometimes it doesn’t work at all — but it is a bold mess that commands attention.

Subscribe in a reader
← Must Be Adjacent to the Hotel California
Oh, Hell →
Scroll Up