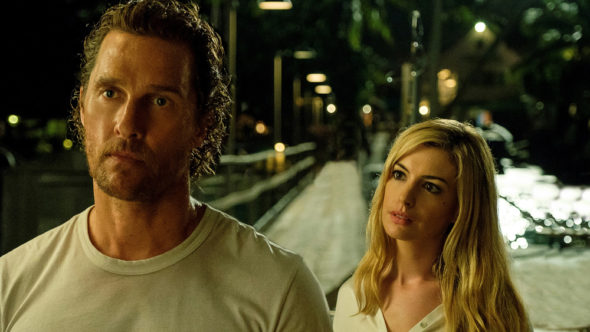 McConaughey takes a long, emphatic drag on a cigarette, then downs a shot of rum, his constantly wet t-shirt screaming for mercy.

Hathaway vamps in from the thunderstorm, wearing a hat pulled down low and a raincoat from the “nothing underneath” collection at Victoria’s Secret.

“I still love you, high school sweetheart, and now you have to save me…and our child,” she purrs. “Take my abusive husband Jason Clarke out on your fishing boat, feed him to the sharks, and I’ll give you ten million dollars.”

Yes, the noir is strong with Serenity, with familiar tropes laid so heavy you know something must be up. So when writer/director Steven Knight finally does make his pivot a la Gone Girl, the real eyebrow-raiser is why.

Knight, whose career has shown flashes of brilliance (Eastern Promises, Locke), takes his latest in some wild directions, almost none of which make much sense. There’s plenty of pretty island scenery, “fish on the hook” and “one that got away” symbolism, along with some random supporting talent (Diane Lane, Djimon Hounsou) that feels as wasted as the leads.

The spoon-feeding that’s waiting at the end of Serenity is well-intentioned but structurally misguided, landing so far from the mark that just embracing that early Body Heat wave and riding it out might have made for a better crash.

← Hold On to Your Butts
Pen Pals →
Scroll Up