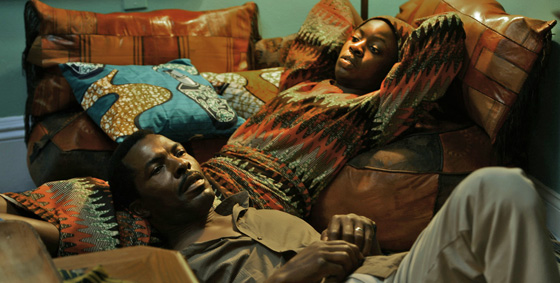 Mother of George is a stylish, visual feast, a film steeped in cultural traditions surviving in the modern world, and the universal anguish over complicated life choices.

Isaach De Bankole (The Limits of Control)  and Danai Gurira (The Walking Dead) are both excellent as, respectively, Ayodele and Adenike, a Nigerian couple living in Brooklyn. At their wedding, Ayodele’s mother proclaims the couple’s first son will be named George, a responsibility that weighs heavily on Adenike as the months pass without a pregnancy to announce.

Family and friends present homemade solutions such as fertility blessings and traditional teas, but the situation grows dire. Finally, Adenike”s mother-in-law offers her a shocking solution.

Director Andrew Dosunmu, blessed with the sublime cinematography of Bradford Young, often keeps his camera still, letting the characters move in and out of frame, while embracing the vibrant colors ever present in the traditional garments and in other neighborhood surroundings.  As Ayodele and Adenike continue their attempts at conceiving a child, Dosunmu bathes the lovers in a tender, sensual tableau.

The script, a first from playwright Darci Picoult, is often understated and poetic, but eventually turns to moments of melodrama and contrivance as Adenike becomes more desperate to please her husband and extended family.

Those moments aside, Mother of George is a lush, richly visual work from a director who shows much potential for originality.