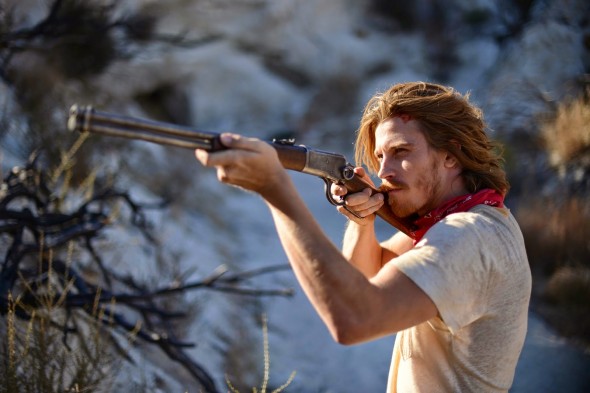 So begins the battle of wits and wills at the center of Mojave, writer/director William Monahan’s meditation on the alpha male.

Thomas (Garrett Hedlund) is having an existential crisis. He’s been famous his entire adult life, and now that he has everything, there’s nothing left for him to want. His downward spiral leads him into the desert, where he happens upon a drifter (Oscar Isaac).

The duo’s hyper-literate fireside exchange is tinged with predatory tones, each man intrigued by the shifting ground of dominant/submissive beneath the wordplay.

The stilted, noir-esque characters – including bizarre cameos from Walton Goggins and Mark Walberg – are too hard boiled to be authentic. Instead Monahan and his cast create entertainingly dead-eyed facsimiles of humans, each floating (often meaninglessly) in and out of the battling pair’s dilemma.

What is that dilemma? Well, something happened out in that desert, and as drifter Jack says, “The game is on, brother.”

The wealthy, handsome Thomas misjudges his lowlife adversary, but Jack is equally guilty of underestimating the superficial pretty boy he’s set as his mark. Don’t look for a good guy in this battle, though, because the world would be better off without either party, and they both know it.

Isaac ranks among the most talented actors working today. If you only know him from Star Wars, you need to look deeper into this chameleonic performer’s work. He struggles here and there with Mojave, though, because Monahan’s writing makes it hard to find a real person beneath all the machismo.

Hedlund is no Isaac, but it’s fun to see the chemistry between the two (who shared a similarly uncomfortable chemistry during their fateful car ride in Inside Llewyn Davis).

Ultimately the cat-and-mouse thriller drowns in its own testosterone – the pair of utterly suicidal antiheroes buckling beneath their burdensome masculinity. Still, as literary references abound and the more-alike-than-different outsiders bristle at societal constraint, this over-written mess remains curiously fascinating.