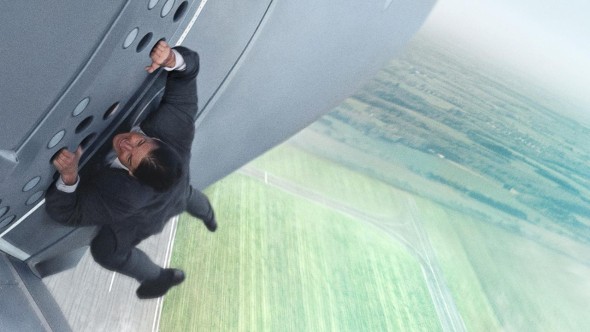 Tom Cruise may have finally found a marriage that will work. His partnership with writer/director Christopher McQuarrie has produced four of the actor’s most recent films.

McQuarrie inherited the series at its peak, Brad Bird’s Mission: Impossible – Ghost Protocol having brought the franchise back to relevance with talented new teammates, extravagant set pieces, and much-needed humor.

Blessedly, the talentless Paula Patton sits this one out.

In her place as the beautiful woman who will appear in only one episode is Rebecca Ferguson as the mysterious double (or triple?) agent Ilsa Faust.

Now disgraced and disavowed by their own government, what’s left of IMF must expose their underworld counterpart The Syndicate to reclaim their status and save the world.

McQuarrie keeps the pace moving with a gliding camera that not only captures the enormity of each sequence, but develops a graceful, controlled urgency about each event.

Truth be told, though, the movie succeeds or fails depending on Cruise, and Ethan Hunt is a great character for the beleaguered movie star. Cruise can show off his still quite impressive physical presence, the script’s use of humor capitalizes on the actor’s underused strengths, and let’s be honest – Cruise has a bit of the crazy-eye, which makes him more believable in the part.

The action sequences are not quite as breathtaking as they were in Ghost Protocol, but they are impressive nonetheless.

What McQuarrie does better than any previous director in the series is to imbue every scene with a bit of humor – enough to exploit the ridiculousness of the situation without actually mocking it. He finds the fun in the familiar old gimmicks and draws on the strengths of his cast to create a blast of entertainment.

← Block Party
Nothing But the Hits →
Scroll Up