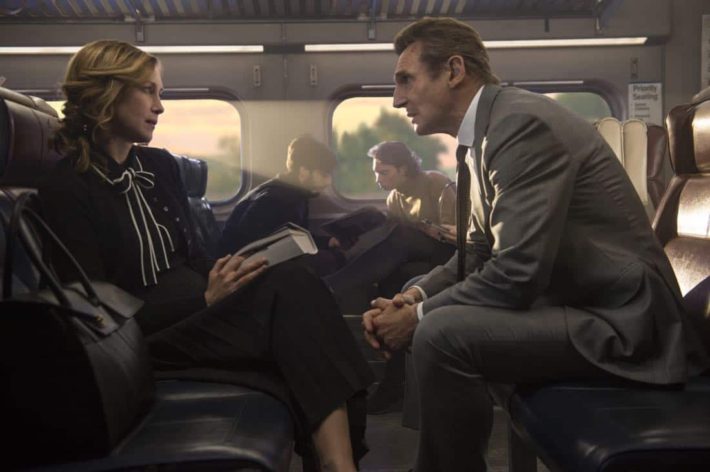 In 2014, Jaume Collet-Serra directed Non-Stop, a Liam Neeson thriller that saw the down-on-his-luck Irishman with a particular set of skills trapped on a speeding vehicle with a killer, a mystery, and an outside force looking to pin some wrongdoing on him.

This go-round, happily married devoted father Michael MacCauley (Neeson) gets chatted up by the lovely and mysterious Joanna (Vera Farmiga) as he heads home on his nightly commute. She poses a question: would you do one little thing—something you are uniquely qualified to do—if it landed you 100k and you had no idea of the consequences?

Well, it’s not a game and next thing you know he’s dragging his lanky frame up and down the train cars trying to find a mysterious person with a mysterious bag before his family is nabbed or someone else gets killed.

How many times do we have to see this movie? We get it, Neeson is not a man to be messed with. He’s savvy, noble and he can take a punch.

Farmiga’s always a welcome sight, plus Sam Neill and Patrick Wilson contribute as they can. But mainly it’s just you, Neeson and a host of stereotypes trying to test your mystery-solving skills but not your patience.

At its best, The Commuter is a B-movie popcorn-munching ode to the forgotten middle class good guy. At its worst, a boldly predictable waste of talent littered with plot holes and weak CGI.

It’s a Liam Neeson movie. What do you want?