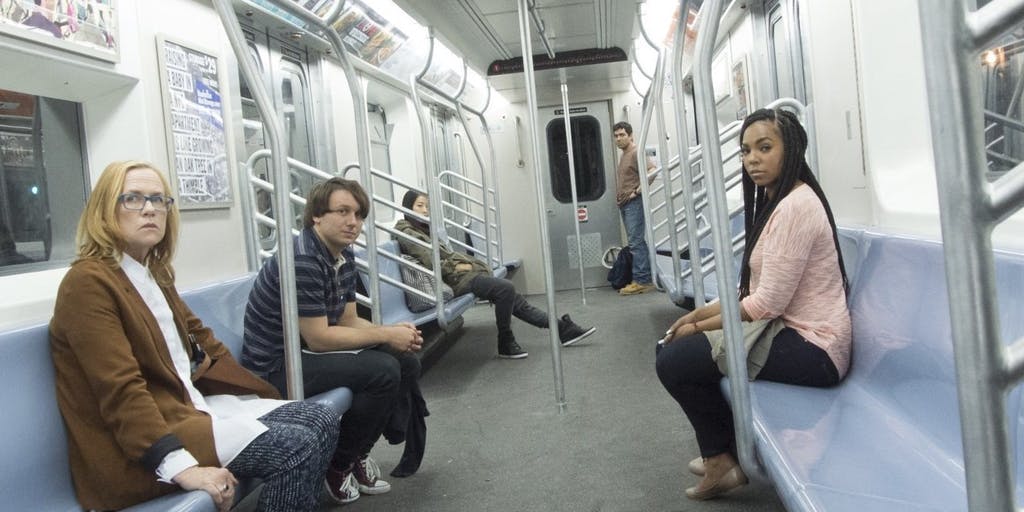 Based on the musical of the same name, director Michael Berry’s film Stuck is the story of six strangers trapped on a subway car who change each other’s lives in meaningful ways.

Or at least, that’s what the movie tries to achieve. Unfortunately, it doesn’t accomplish its goal.

The characters are all one-note stereotypes. During their time trapped on a subway car, they reveal their own prejudices toward each other, as well as huge details of their lives. The personal stories, the elements that attempt to make each character unique, are all shared through song. However, it’s easy to guess who each character will be because they’re roles we’ve seen many times before.

As each person shares a little more of themselves with the others, the characters’ facial expressions are meant to convey internal change. There are sympathetic looks, a few words of apology, but none of it feels like true growth. The characters who enter the subway car are the same characters when they leave the subway car.

One of the most frustrating elements of the film is the “all is forgiven” attitude toward one character who has been stalking another character for several days before the events of the film. Though we learn the intentions are “innocent,” it’s angering to watch as the other characters give him a pass because he’s a good artist.

The musical aspects here are the strongest elements. The choreography, the lyrics, the musical arrangements, and the performances are all effective, with the individual character songs among the only moments where genuine emotion is conveyed. The musical styles are unique to each character, giving them more depth than the dialogue conveys.

All the actors are strong singers, which is refreshing since several movies lately have featured actors who can’t sing well, or at all, in singing roles. It’s one of the areas where Stuck succeeds. Ashanti is particularly powerful in her vocal performance, though Giancarlo Esposito also stands out as an impressive vocalist.

Though Esposito sings several of the film’s songs, his character is the least explored. He isn’t given a backstory like the others, and it’s unclear if he’s meant to be a conduit for the others to reveal themselves or a character in his own right.

In a film like Stuck, the point is to never judge a book by its cover. The people we pass on the street everyday are dealing with things about which we will mostly likely never know. Hardships in their lives may be the reason why they’re impatient or cruel, so it’s a reminder to treat everyone with kindness.

It’s not a bad message. But it’s one that’s been delivered before in more effective ways.