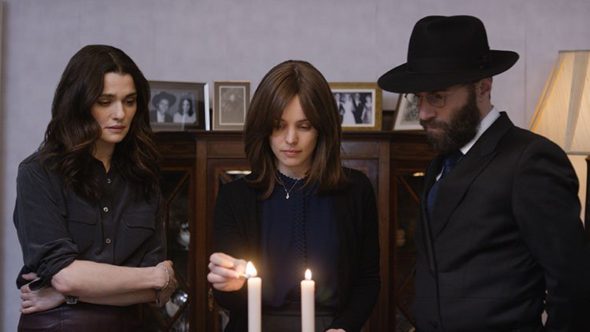 Upon creation, men and women were given the choice of free will, and with that comes the unique “power to disobey.”

An Orthodox Jewish flock in London hears that message from a beloved rabbi, and then lives it in Sebastian Lelio’s quietly compelling Disobedience.

Ronit (Rachel Weisz) was raised in that devoutly religious community, and then shunned for her attraction to childhood friend Esti (Rachel McAdams). After building a life in New York, Ronit is called home for the burial of her father. She’s greeted by a less than warm welcome and the news that Esti has married Dovid (Alessandro Nivola), another longtime friend who is now also a respected rabbi.

Gracefully adapting Naomi Alderman’s novel, Lelio (A Fantastic Woman, Gloria) continues his interest in stories of women struggling to be free and live as their true selves, exerting their power to disobey.

Weisz, McAdams are Nivola are all wonderful, crafting resonant characters as Lelio slowly builds the drama of a conflicting, scandalous triangle. Little backstory is provided early on, giving more weight to pieces that are picked up from characters carefully dancing around old wounds.

← Screening Room: Everybody Back in the Pool!
Dead Again →
Scroll Up