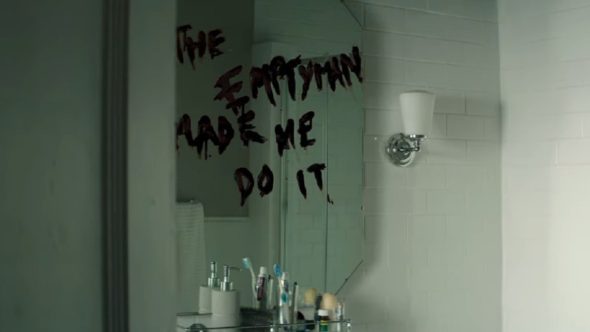 Okay, so here’s the story: if you’re on a bridge at night and blow into an empty bottle, you’ll conjure the Empty Man. And in three days, he’ll find you.

Right, so it’s a bit of Candyman, some of The Ring, lots of jump scares and kills for Halloween, got it.

Writer/director David Prior adapts the series with James Badge Dale in the lead as James, an ex-cop still grieving from the loss of his wife and son. When the daughter of his good friend Nora (Marin Ireland) goes missing, James sidesteps the local Missouri cops for a rogue investigation of his own.

Prior, a video vet making his feature debut, lays down an atmosphere that gets plenty creepy, but seldom horrific. As James digs in, the film becomes a dark mystery, one full of freaky cult members with aspirations of total consciousness and malevolent chaos.

Dale keeps your interest with a terrific performance full of wounded determination, getting solid support from Ireland (plus Stephen Root in a memorable cameo).

But at nearly two hours and twenty minutes, it’s a bit too much of wandering slog in need of a leaner path.

Come in looking for a tidy little slasher, and you’re going to be disappointed. But if you’re down for a dark and moody rumination on grief, metaphysics and itchy brains, you could conjure up worse than The Empty Man.