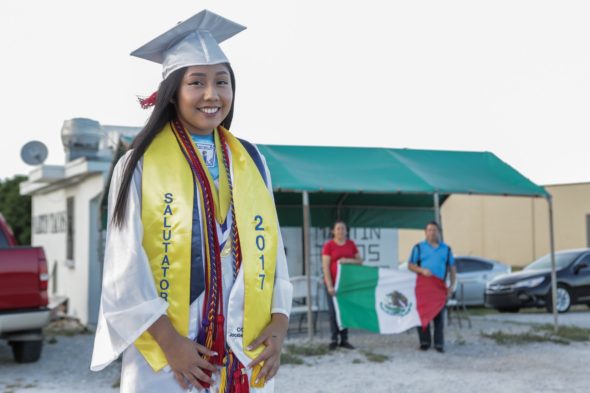 If you’re the parent of a current high school senior, you’ll find some extra poignancy in Pahokee, an observational doc that follows four small town Florida teens through their last year at the predominantly African-American Pahokee High School.

B.J. is the football star on a team dreaming of a D1 State Championship. Jacobed is the Salutatorian who helps out at her parents taco stand. Junior already has a child at home. Na’kerria is running for “Miss PHS” and weighing community college vs. the full university experience.

For their first documentary feature, directors Patrick Benson and Ivete Lucas take a hands off, leisurely approach that gives the events plenty of room to breath – sometimes a little too much room. Some obvious questions (where’s the mother of Junior’s child?) are ignored in favor of following strands that could have been trimmed in a tighter edit.

But the film still finds its resonance in moments both large and small. From the face of the older white Harvard rep at the college fair, to Jacobed’s emotional description of her parents’ sacrifice, to the prom dress adorned with pictures of Trayvon Martin and other victims of excessive force, Pahokee serves plenty of subtle, evocative sequences that will make you care about these kids.

The further you are away from high school, the easier it is to dismiss what the class of 2020 has lost this year. Pahokee‘s class of 2017 serves a tender and truthful reminder of a crossroads unlike any other.

Subscribe in a reader
← Dishonor Among Thieves
The Outsiders →
Scroll Up