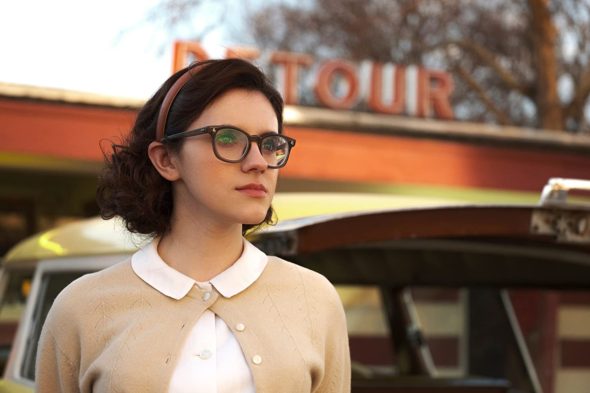 Small town Wakina, Oklahoma in the 1960’s is about as dreary as you might expect. Despite many lamenting the “good old days,” director Martha Stephen’s new film, To the Stars, reminds us that world was not the ideal many would have you believe. This is a world in which outsiders were run out of town, thrown to the wolves, or worse.

Iris Deerborne (Kara Hayward) is one such outsider. She is derided by her classmates, teased by both girls and boys (the teasing of the boys has a sinister sexual nature), and tormented at home by her alcoholic mother, Francie (an effectively cruel Jordana Spiro). Her father is a passive protector, stepping in only after her mother has already thoroughly berated Iris for her differences.

Into Iris’s life strides the outspoken Maggie (Liana Liberato), a girl from “the big city” who speaks her mind and isn’t afraid to hurl rocks at the “good-old-boys” who harass Iris. And while Maggie seems to have a handle on who she is and what she wants, we quickly learn that not all is what it seems with this enviable newcomer.

What connects Iris and Maggie is their sadness. A large part of the movie is the exploration of female sadness, from the quiet despair of the woman who runs a beauty parlor from her home to Francie’s alcoholic outbursts. Even Maggie’s mother seems burdened with her own melancholy as she tries to make the best of her life in a new town. Each of these women feel their “otherness” in a town inhabited by women who know where they fit.

As Iris and Maggie bond, first time screenwriter Shannon Bradley-Colleary can’t seem to help falling into familiar coming-of-age clichés. There’s the makeover montage as the two girls skip school (a haircut, a new sweater set, and the removal of glasses equals instant confidence). Maggie’s outspoken nature emboldens mousey Iris. The boy Iris likes is sensitive and mysterious, not at all like the other boys. You can mostly predict how the chips will fall as we watch the two become friends.

Occasionally, the film finds ways to thwart overused tropes. Unfortunately, these glimpses of originality are too few. Often, the audience is left scratching its head over certain character choices. Maggie’s mysterious sadness is explored and explained too late in the film and never given the resolution it deserves. This is Iris’s story, and Maggie’s otherness only serves to help Iris become a confident woman.

A few lovely moments of female solidarity help the movie become something a little more than a cliched look at two outsiders bonding, but those instants are mostly lost in a film that can’t seem to embrace its own otherness.

← Born in a Small Town
Kelly Green →
Scroll Up