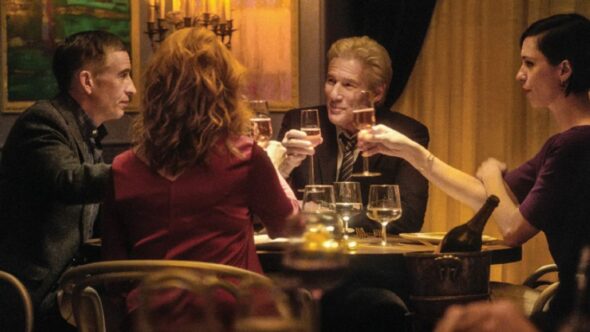 Enduring a dinner party – in cinematic terms, it can lead to a cathartic catfight (Carnage), mass suicide (The Invitation) or an all out apocalypse (It’s a Disaster).

It would appear that having to remain civil through such a meal causes us, as a civilization, a lot of anxiety.

Writer/director Oren Moverman (Rampart, The Messenger) ignites that discomfort and then looks at it from all angles with his newest, The Dinner.

Richard Gere – that silver fox – is Stan Lohman. A politician with a congressional race on the line and an important bill currently up for a vote, he’s juggling a lot right now. So why stop everything to join his brother Paul (Steve Coogan), along with Paul’s wife Claire (Laura Linney) and his own wife Katelyn (Rebecca Hall) for a 5-star meal?

The restaurant of choice is beyond posh, its lushly appointed dining rooms and obscenely laden tables a fascinating surrounding for the drama unfolding. When Moverman remains with his primary foursome inside this restaurant, an involving and curiously repellant morality play unfolds.

Moverman has a particular talent – one that these veterans relish. He scripts characters who are rarely entirely what they appear at first blush, never go where you expect them to go, and somehow wind up being the same and yet remarkably different than what you’d imagined.

This kid of layered challenge can prove too much for many actors, but Hall, Coogan, Gere and especially Linney are custom made for such work. Indeed, in many respects these actors are superior to their material.

Linney and Hall suffer from underwritten characters, which is a shame because both find something primal under all their characters’ studied polish.

Gere is breezily at ease as the smooth politician, convincing himself and others of his genuineness as he works the room.

Coogan is the standout surprise, playing against his traditionally comedic type as the enigma in the middle of this conundrum.

Suffice it to say, the couples have a parental nightmare to contend with, and it’s when Moverman brings in flashback to enlighten the audience that his drama begins to lose its way. Mix in some additional flashbacks to illuminate Paul’s character, including an excruciating Civil War sequence (we get it – sibling rivalry – enough already!), and the slow film comes to a stand-still.

It’s a frustrating way to spend an evening, The Dinner, but not a waste of time. Every member of the cast has a moment of brilliance working with a script that also shines in fits and spurts.