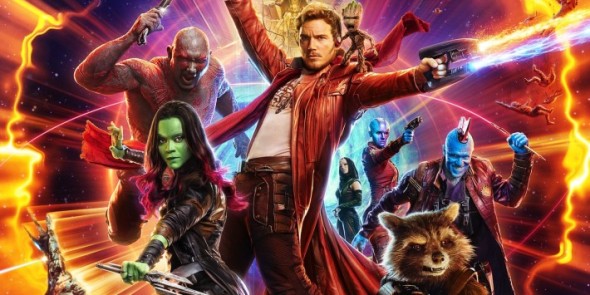 Guardians of the Galaxy Vol. 2

Three years ago, James Gunn and Marvel became superfriends, making use of inspired casting, crisp writing and some classic 70s jams to make Guardians of the Galaxy the most fun to be had at the movies in 2014.

But is that second mixtape ever quite as awesome as the first? Rarely, and that’s the Catch-22 of the original film’s surprising blast of space zaniness. While we never saw that one coming, this new one arrives with weighty expectations.

No, Volume 2 can’t match the ruffian charm of the first, and there are some stretches of not-much-happening-here. But Gunn’s sequel shares a lot of heart, swashbuckling visuals and more than a few solid belly laughs.

But please, stop trying to make Howard the Duck happen.

Peter Quill (Chris Pratt, rugged everyman dufus) and his band of misfits-for-hire run into some troubles here and there across the galaxy. Yondu (Michael Rooker – hooray!) and his crew of Ravagers are still on their tail, and some pompous gold people from Sovereign (so they’re “Sovereign citizens” – well played) want Rocket dead.

But all might be well when Quill finally meets his father, Ego (who else but Kurt Russell?) and learns the surprising news of his lineage.

What – a comic book movie inspired by daddy issues? Stop it!

It may be a logical character arc for Quill, but when one too many tragic backstories build at the expense of fun, the running time starts feeling a bit bloated. Good thing Gunn has a fine instinct for when enough is about to become too much, pivoting from the dramatics with dazzling derring-do or exactly the right gag.

He also knows we’re already invested in these characters, and doesn’t mind spending some of the capital he earned last time out.

Bradley Cooper again offers ripe sarcasm as the voice of Rocket, but Dave Bautista is the breakout comedy anchor of GOTGV2. As the hulking Drax, Bautista’s booming guffaws or deadpan one-liners are a consistent treat. Zoe Saldana’s Gamora seems the odd Guardian out, too often given little more to do than deny Quill’s claim that they’ve got a “Sam and Diane unspoken thing” goin’ on.

And then there’s Groot (Vin Diesel).

There are more great classic hits to re-discover (or, for you kids, get to know), including a fantastic piece of action set against the backdrop of…wait for it…Jay and the Americans’ “Come a Little Bit Closer.” Stingers? Oh, yes, during and after the credits, so just plan on staying around til the staff sweeps you out with the candy wrappers.

Does Guardians 2 seem like a rehash? Sure, at times, and there’s never any doubt whoever’s shooting at our heroes is bound to have horrible aim. But when a rehash serves up this much wit, eye candy and escapist fun, you know what they say….

← Bon Appetit
Life Sucks and Then You Die →
Scroll Up