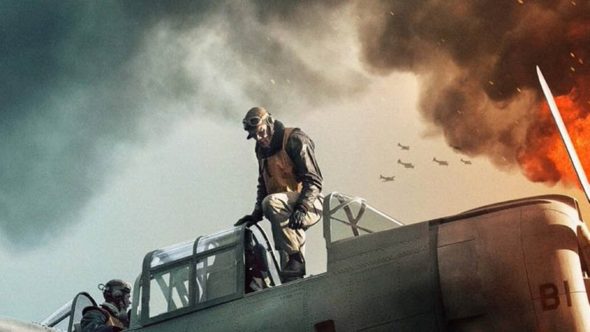 After Independence Day, 2012, The Day After Tomorrow and more, the book on Roland Emmerich is fairly easy to read: expect spectacle over storytelling.

Midway is Emmerich’s latest, and that checks out.

A grand production respectfully dedicated to the American and Japanese forces that fought the legendary battle, the film does have heart in all the right places. But too often, it feels more inspired by war movies than the real thing.

Patrick Wilson is Edwin Layton, whose description as “the best intelligence officer I’ve ever known” gives us an early introduction into screenwriter Wes Tooke’s plan for character development.

“I told you she was a firecracker!”

“He’s the most brilliant man I know.”

“Best pilot in the world!”

Layton still feels guilty about the intelligence failures of Pearl Harbor, and he pleads with Admiral Nimitz (Woody Harrelson) to trust his prediction of an upcoming Japanese invasion of Midway Island.

Names such as Nimitz and Halsey (Dennis Quaid) may be the only ones familiar to non history buffs, but no matter, none of the characters feel real anyway. They’re just humans who pose nicely while spouting the dialog of actors explaining things to an audience.

So much for the storytelling, now for the spectacle.

When the battles are raging, especially in the air, Midway soars. Constructed with precision and clarity, these extended set pieces allow Emmerich to indulge his showy instincts for maximum payoff.

Director John Ford famously filmed on Midway Island while the battle took shape. Emmerich and Tooke don’t ignore that fact, a not so subtle reminder that this is their movie about war, and they’re going big!

And about half the time, that’s not a bad thing.

When it needs to be big, this film is huge, detailed and epic. But when it needs to be small, and make this history breathe again through intimate authenticity of the souls that lived and died in it, Midway just can’t stop flexing.