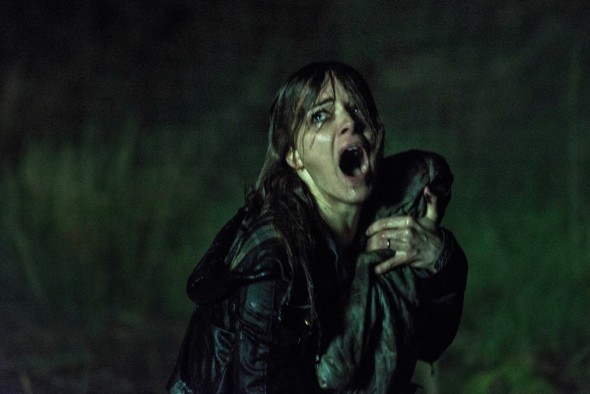 Adam (Joseph Mawle) and Clare (Bojana Novakovic) move, infant Finn in tow, from London to the isolated woods of Ireland so Adam can study a tract of forest the government hopes to sell off to privatization. But the woods don’t take kindly to the encroachment and the interlopers will pay for trespassing.

What’s in the woods and why is it so angry?

“An occupied people forced into hiding by fire and iron,” explains a friendly Irish policemen to the Brit couple helping to sell off Erin’s ancient forests.

Openly influenced by Evil Dead, The Shining, The Thing, and Straw Dogs, among others, the film rarely feels stale for all its rehash. Hardy borrows and spit-shines, but the final amalgamation takes on such a faery tale quality that it generally works. (Except for that Necronomicon-esque book – that’s just a rip off.)

Hardy has a real knack for visual storytelling. His inky forests are both suffocating and isolating with a darkness that seeps into every space in Adam and Clare’s lives. He’s created an atmosphere of malevolence, but the film does not rely on atmosphere alone.

A lot of the scares require very little visual effect – one early bit where Adam is knocked into the trunk of his car while something claws and bangs at the door toward his screaming infant is particularly nerve wracking. Still, Hardy’s joy and real gift is in the creature feature half of the film.

The magical folk of the Hallow – “faeries, banshees, and baby stealers” – have a look that is unique, appropriately woodsy, and immensely creepy. And just when you think the film’s reached its peak with this back woods monster mash, Hardy takes a sharp turn with a deeply felt emotional plot twist.

The political allegory doesn’t really pan out; Clare, though well performed, is entirely one-dimensional; the mythology of the sludge, while cool, doesn’t clearly fit with the monsters; and why in the hell do the rest of the natives stay?!

That’s a lot to ponder, but Hardy – magician that he is – will keep you so interested with relentless pacing and horror wonder that you won’t even notice.