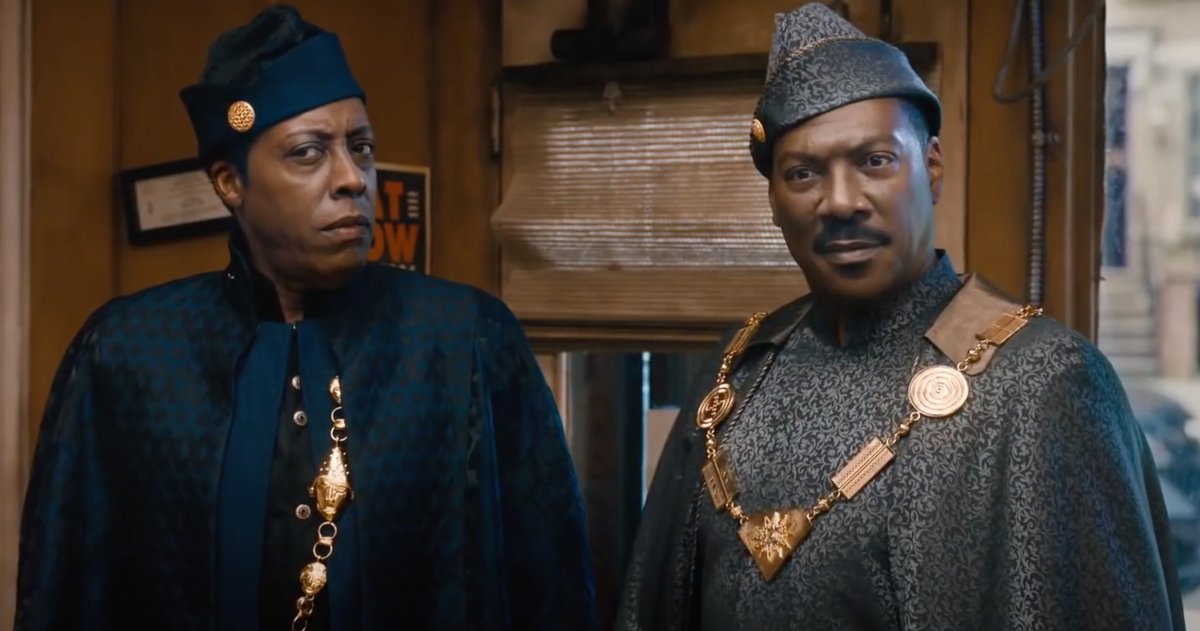 A quip about unnecessary sequels is just one of several “wink-wink” gags you’ll find running throughout Coming 2 America. And though the original was heavy in sexism (even for 1988) and light on LOLs, there’s little doubt that the film’s huge fan base has been anxious for a follow-up.

Eddie Murphy teams again with director Craig Brewer, which is reason for optimism, since Brewer helmed one of Murphy’s career highs – 2019’s Dolemite Is My Name. But screenwriters David Sheffield and Barry Blaustein return from the original film, and while they thankfully update the sexual politics, the humor is again scattershot at best.

Most of the cast is back, including 90 year-old James Earl Jones as King Jaffe of Zamunda. He’s ready to pass the throne to Prince Akeem (Murphy), but is worried that Akeem and Lisa (Shari Headley) only have daughters, and tradition calls for a male heir.

What’s this? The loyal Semmi (Aresenio Hall) has been keeping a very big secret all these years, which means Akeem and Semmi must return to New York to find Akeem’s long lost son.

That would be Lavelle (Jermaine Fowler), who makes the trip to Zamunda for royal training with his mom (Leslie Jones) and uncle (Tracey Morgan) in tow. The additional family is good for Lavelle, and for us, as Jones and Morgan’s “fish out of Queens” antics give the film its most consistently fresh and funny moments.

They’re just aren’t enough of those moments to pump real life into part 2. The girl power is overdue and and love lessons are generic, each as predictable as getting more insults from the barbershop guys and more R&B stylings from Randy Watson.

Buy hey, you go to see Sexual Chocolate, you want to hear the hits. And if you’ve been waiting for Coming 2 America for reminders of what you liked the first time, you’ll get them.