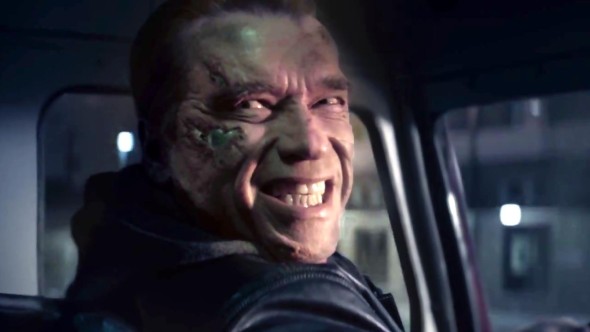 It would be nice if Terminator Genisys put the final ribbon on the iconic franchise. Not because this fifth installment is that bad, but rather because it’s just good enough to leave you with more satisfaction than disappointment.

Much of that comes from the blast it generates rehashing the pasts of parts 1 and 2 – hugely popular films that have earned a permanent place in pop culture – and conveniently dismissing 3 and 4. Smart move.

To get there, though, we have to wade through a script overloaded with time-hopping threads requiring repeated explanations that still can’t quite keep the head scratching at bay.

In 2029, Resistance forces led by John Connor (Jason Clarke) have won a critical victory against Skynet, but John knows there is still work to be done.

His goal is the destruction of their time machine. He finds it, but too late to prevent Skynet from sending a terminator back to 1984 to kill John’s mother Sarah (GoT‘s Emilia Clarke). John’s right hand man, a certain Kyle Reese (Jai Courtney) volunteers to go back and protect her. Sound familiar?

So Kyle basically drops in on the first film, but things have changed. Sarah knows what’s up, the original terminator is met by an “aged” model (Arnold) already serving as Guardian, and then the “liquid metal” version from T2:  Judgement Day wants to play, too!

Screenwriters Laeta Kalogridis and Patrick Lussier set a nice hook (young Arnold fights old Arnold!) but when the altered timelines and memory fragments keep coming, you may need to choose between keeping up and giving up.

The saving graces are the moments of fun that do cut through, usually via Arnold and his “old, but not obsolete” machine on a mission. Director Alan Taylor (Thor: the Dark World) gives him some impressive, if not entirely original set pieces, but others don’t seem worthy of the blockbuster budget. It’s a hot then cold scorecard the film can never shake.

It wants to do so much, but is never able to sustain any solid momentum. Snappy dialogue sours, action is derailed by more exposition, and sci-fi complexities mount. In short, the polar opposite of what made the first two films such a hoot.

But that steel, hard-to-kill heart still beats in Terminator Genisys, just enough to use every ounce of good will it earns.

So is this really hasta la vista? Check box office totals for the final answer, but stay past the credits for a pretty big clue.