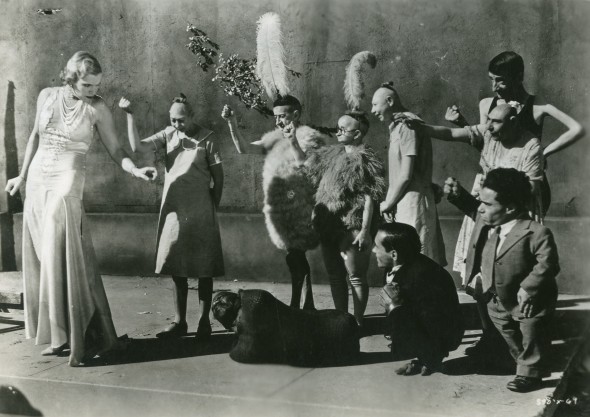 Well, that’s not for me to say. I suspect you may be a bad person, perhaps even a serial killer. Or maybe that’s me. What I can tell you for sure is that this film is unsettling, and the final, rainy act of vengeance is truly creepy to watch.

Beautiful ‘normal’ Cleopatra (Olga Baclanova) performs in the circus, flirting with sideshow manager Hans (Harry Earles) for the perks – the gifts, and the chance to mock him with the other ‘normals’ in the group. When she realizes that Hans is loaded, she decides to marry and then kill him, with the help of dunderheaded Hercules (Henry Victor).

Among the film’s drawbacks are the ridiculously thick accents of most of the principal actors. Earles, in particular, is almost impossible to understand, but he is – god help me – absolutely adorable. That’s Hans’s problem, of course. His baby face and tiny stature make him tough to take seriously, and his tendency to fall for opportunistic bitches that tower over him isn’t helping.

To make things even more unseemly, Hans is loved truly by fellow little person Frieda, played by the actor’s own sister Daisy. The two characters are not, as far as I can tell, meant to be related, but they look exactly alike, which just makes the whole effect all the weirder. I have no idea if this was intentional or not, but I’m for it.

Well sir, the close knit “family” of freaks gets wind of Cleopatra’s plan, and they exact revenge. The revenge itself – the final act – makes no logical sense, but the perpetration is awesome.

Browning’s camera stays near the ground, filming everything as lowly, dark, hiding, creeping. He’s taking the inconcrete fear we have of what is abnormal and making it literal: that which we hide from view will creep forth and kill us.

Or, turn us into a chicken lady.