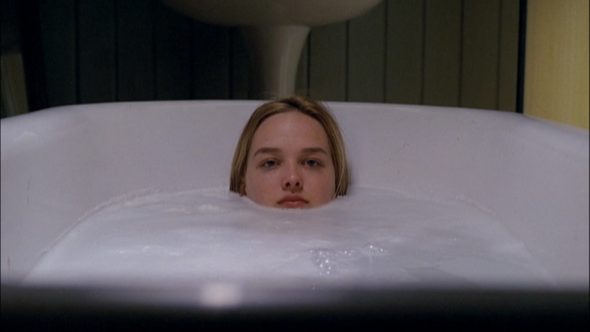 I know what you’re thinking. Sex and death—that could be literally any film in the genre. Aaah, yes, but we’re not talking metaphorically or even loosely connected. Sure, the quickest way onto Michael Meyers’s or Jason Voorhees’s kill list is by having sex, but that’s not immediate enough. Let’s disregard the middle man, lose the pause, and go right to the horror films where sex and death are immediately, gorily and irreversibly linked.

Happy Valentine’s Day, by the way!

Of all the films built on the hysteria of impending womanhood, few are as specific as Teeth, a film in which a pubescent discovers a sharp set where teeth ought not be. This is a dark comedy and social satire that is uncomfortable to watch no matter your gender, although I imagine it may be a bit rougher on men.

Treading on the dread of coming-of-age and turning male-oriented horror clichés on ear, Teeth uses the metaphor implicit in vagina dentata—a myth originated to bespeak the fear of castration—to craft a parable about the dangers as well as the power of sexual awakening.

Weixler’s evolution from naïveté to shock to guilt to empowerment never ceases to captivate, but the story itself settles for something more conventional and predictable than what the shockingly original first two acts suggest.

A newlywed American couple head to Paris, ostensibly to honeymoon, but Shane (Vincent Gallo) is really there to re-establish connection with old colleagues Coré (Béatrice Dalle) and her husband, Léo (Alex Descas). The three scientists once participated in an experiment, and Shane needs to find them.

The film is a startling work of biologic-horror, but its existential riffs on intimacy, dominance and violence—common fare in the genre—are clearer-headed and more disturbing here than in anything else that swims the same murky waters.

What you’ll find in first-time filmmaker Julia Ducournau’s Raw is a thoughtful coming-of-age tale. And meat.

It Follows is yet another coming-of-age tale, one that mines a primal terror. Moments after a sexual encounter with a new boyfriend, Jay (Maika Monroe) discovers that she is cursed. He has passed on some kind of entity – a demonic menace that will follow her until it either kills her or she passes it on to someone else the same way she got it.

Mitchell’s provocatively murky subtext is rich with symbolism but never overwhelmed by it. His capacity to draw an audience into this environment, this horror, is impeccable, and the result is a lingering sense of unease that will have you checking the perimeter for a while to come.