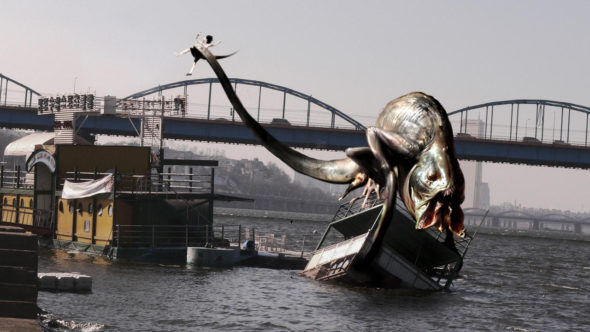 Why fear the sea? The same reason to see menace in the deep, dark unknown of space or the dense and dizzying claustrophobia of the forest: because it’s really hard to see what’s in there.

That leaves us to our imagination, and when is that ever a good idea? Here, then, are some of the most imaginative ways horror filmmakers terrorized us with tales of what lies beneath.

Up from the depths, 30 stories high, breathing fire…you know the rest. Surely we had to have a Fifties science run amok beastie on this list, and while there was some stiff competition, nothing really bests Godzilla.

Visionary director Joon-ho Bong’s film opens in a military lab hospital in 2000. A clearly insane American doctor, repulsed by the dust coating formaldehyde bottles, orders a Korean subordinate to empty it all into the sink. Soon the contents of hundreds of bottles of formaldehyde find its way through the Korean sewer system and into the Han River. This event – allegedly based on fact – eventually leads, not surprisingly, to some pretty gamey drinking water. And also a 25 foot cross between Alien and a giant squid.